8:01 AM – With Kara, who comes from Atlanta (USA), we ran on an attractive route of more than 9 km and took advantage of the magnificent landscapes offered by Paris, emphasized by the sun which accompanied us this morning: splendid urban landscapes of Paris, buildings and monuments which revealed us small secrets during our running.

For example on this photo of the Louvre taken since the bridge of the Carousel: do you see the lantern stands of the Pavilion of Lesdiguières which is at the right of the photo above?
Let us look closer:

Golden “N” decorate the balcony of the lantern as on the one of the pavilion which faces it, the pavilion of Rohan. These “N” placed in the end of the Second Empire in the middle of the 19th century, honor the Emperor Napoleon III.
But here, on the pavilion of Lesdiguières, these “N” are back to front! We think that the worker who put them, would have inverted them because of his hostility to Napoleon III!
This small secret was discovered during the restoration of the Louvre museum in 1985, more than one hundred years after their installation!

Not far from there, the famous Bridge of the Arts. Some tourists call it henceforth the “Love Padlocks” bridge*1…

It is true that it is about one of the most romantic places of Paris, it would be only by its sight on the Island of the “Cité”. But what do we see if we get closer to the Island, behind the place Dauphine? A bird… 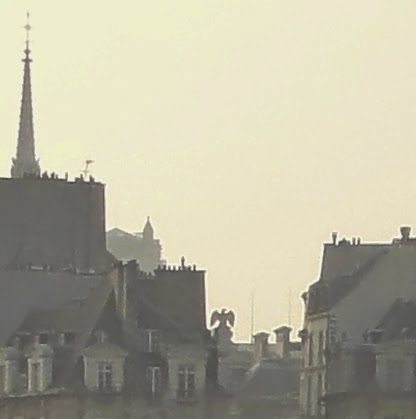 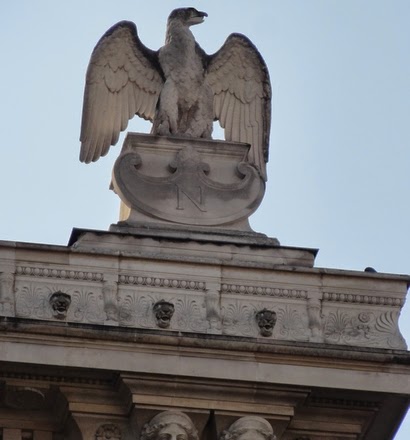 By pursuing our running in the Louvre, we decide to make a photo in the very beautiful squared courtyard (“Cour carrée du Louvre”):


Under our feet you can find the first Louvre, the Medieval Louvre, a fort protecting the West of Paris by strengthening the Outer wall of king Philippe Auguste. If you visit the basements of the Louvre, you can see the foundations of the medieval castle. Here is its representation and a photo of its foundations:


By leaving the Louvre, we go through the garden of Tuileries and its numerous statues:


Notice for example, on the right-hand side of the photo above, the Statue of the Oath of Spartacus: 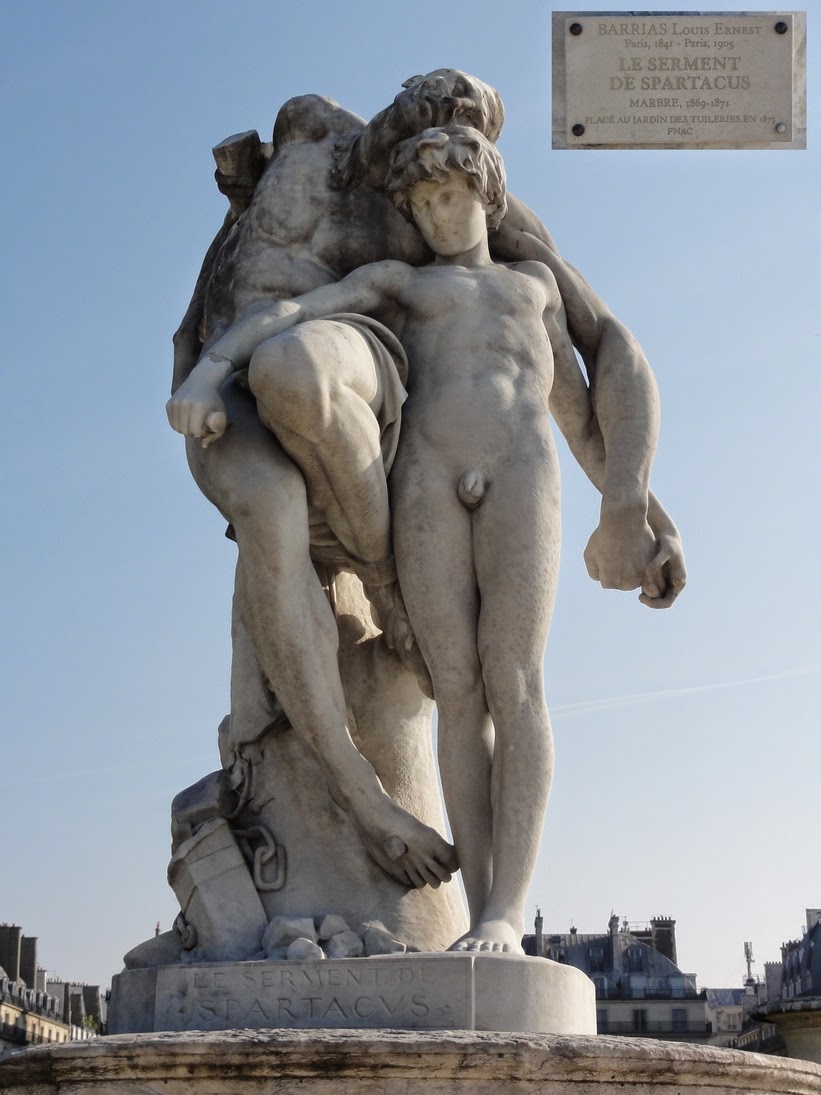 By continuing along the historical axis of Paris, we arrive Place of La Concorde, magnificent place which really deserves a stop.

To the right, in the entrance of the Champs-Elysées, a rearing horse: one of the Horses of Marly. A copy of which the original is in the Louvre, original now protected from the vibrations provoked by the heavy machines of the National day military parade.
Remember this article: Passing in front of the horses of Marly with Mary

If we take a close look, we distinguish green flags. They are the flags of the Paris Marathon that took place five days earlier!

*1 The City hall of Paris recently decided to forbid the pose of these padlocks on buildings or bridges of Paris because they threaten and damage these Parisian heritage. Artists are requested to find a respectful replacement to these wild poses (Article France 3 – in French).

How many Arcs of Triumph in Paris? With Adam and Bridget
⟨ ⟩
By reading our blog, discover examples of routes we follow with our visitors. See the photos which illustrate the places we met. As during the running tours, we enjoy to present you the stories and the anecdotes of the encountered places. Find the route at the end of articles. If you look for information about a particular place, use the Places list or the Search bar below. If these articles inspire you, contact us and we can prepare your tour according to your wishes.