11:03 AM – Lena comes from Sweden. While running, we discovered a Paris colored by the spring.
Look at the photo above where the Place Dauphine shows proudly its chestnut trees in flower.
Created shortly after the “Place des Vosges” (at that time, Place Royale), the Place Dauphine owes its name to the son of king, the “Dauphin”, future Louis XIII, son of Henri IV whose we can see the statue on the west of the Place.
Beautiful small quiet square, opened on the Justice Palace, it was until 1874 a square closed by a third side of buildings. The Place was then a complete triangle.


Here are the buildings which constituted the basis of the triangle:


Other beautiful trees and vegetables accompanied our route:

The oldest tree in Paris


The trees which follow the new banks of the Seine 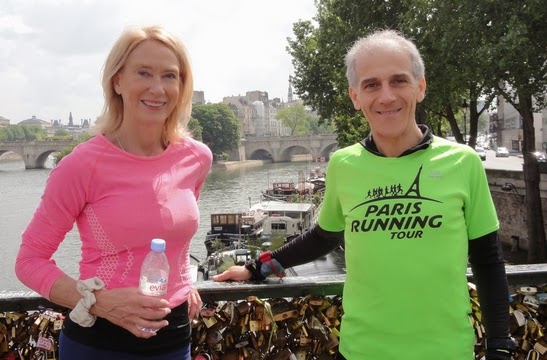 Under the sign of the French-American friendship with Cori
⟨ ⟩
By reading our blog, discover examples of routes we follow with our visitors. See the photos which illustrate the places we met. As during the running tours, we enjoy to present you the stories and the anecdotes of the encountered places. Find the route at the end of articles. If you look for information about a particular place, use the Places list or the Search bar below. If these articles inspire you, contact us and we can prepare your tour according to your wishes.