7:03 AM – With Lysa, from Buffalo (New York), we made a 10 mile run (16 kilometers) to discover the numerous artistic facets of Paris. More than 2000 years of History… and artistic and architectural creations!

Did you notice the numerous Parisian metro entrances with these arabesques forms, as the one that we see on the photo above next to Lysa?
These entrances are typical artistic creations of the beginning of the 20th century, this art which we called the “Art Nouveau”.
The creator, Hector Guimard, very representative artist of the “Art Nouveau” movement, realized 141 of these entrances of the Parisian subway from 1900 till 1912. Some entrance are even covered with a glass roof.
Today, there are only 86 left, 2 with a glass roof as the “Porte Dauphine” one (West of Paris on the Avenue Foch): 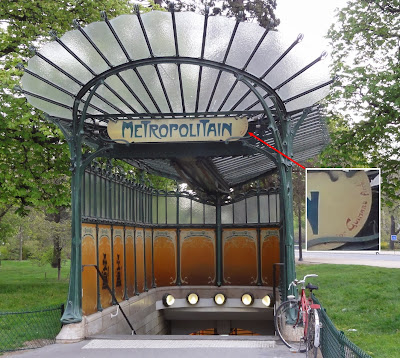 Hector Guimard’s subway entrances were offered to the subways of other cities as Montreal, Mexico City, Chicago, etc. There is even one in the Washington National Gallery of Art!


Still on the Island of “La Cité”, we also admired two Medieval Art examples (vast ensemble of the Middle Ages Arts, covering a period of 1000 years):

The Tower was built for the World Fair of 1889.
From 1889 to 1931, it was the highest monument in the world.
During its construction, it was very criticized, but obtained a big success during the world fair of 1889, success which fell rather fast (in spite of a renewal of curiosity during the World Fair of 1900)
We even intended to destroy it… It is now the most emblematic symbol of Paris!

It’s a pleasure to run in Paris!

From the Eiffel Tower toward Notre-Dame by the Louvre with Marnie
⟨ ⟩
By reading our blog, discover examples of routes we follow with our visitors. See the photos which illustrate the places we met. As during the running tours, we enjoy to present you the stories and the anecdotes of the encountered places. Find the route at the end of articles. If you look for information about a particular place, use the Places list or the Search bar below. If these articles inspire you, contact us and we can prepare your tour according to your wishes.