Monday 27th May – 12:51 PM, Wednesday 29th May – 6:57 PM – First time in Paris for Melinda from Miami (USA) !
What better choice than to start a first stay in Paris doing a visit by running (with Paris Running Tour)? A good way of unwinding legs after a long travel by plane and a first discovery of Paris getting directly into the life of the city.

And why not begin again two days later to discover new paths through Paris?
We thus ran by following two routes which mainly crossed the disctrict of “Le Marais”, the Left bank, the island of “La Cité” and the center of Paris around the Seine.

Here is the route (numbers indicate where the photos of this article were taken): 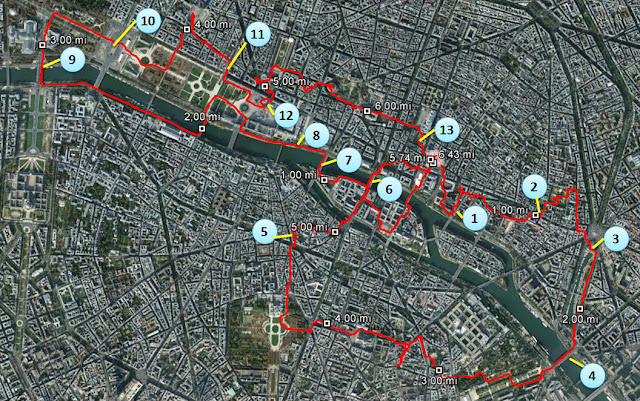 We took numerous photos during our running:

1) “La rue des Barres” (Street of Bars). This name comes because formerly, in the 10th century, on the location of the street, a wall, a fence of wooden bars, constituted a wall protecting Paris:

2) “L’Hôtel de Sully” (The Hotel of Sully). The Duke of Sully, Minister of Finance of king Henri IV, lived in this noble mansion at the end of his life. By crossing the Hotel of Sully, we passed directly from the street Saint Antoine to the “place des Vosges”.

3) The “bassin de l’Arsenal”. Having crossed the place of the Bastille, we met the Basin of the Arsenal, port and canal connecting the river Seine with the Saint Martin canal and which, formerly, was a ditch which filled the moats of the castle of the Bastille.

4) “Pont d’Austerlitz” (Bridge of Austerlitz). See the picture at the beginning of the article.

5) “Cour du Commerce Saint André”. Another place which is situated on the plan of the former surrounding wall of Paris, the wall of king Philippe Auguste. This passage, opened in 1776, allows to reach the Café Procope (1686), one of the oldest cafés in the world.

6) “Le Tribunal de Commerce de Paris” (Commercial court). This building presents the peculiarity to have a dome placed not in the center, but on the side, in a way that the dome is visible from the Boulevard Sevastopol. The dome closes the perspective of the Boulevard by the South.

9) Alexandre III bridge. The widest bridge in Paris. Built with the “Grand” and “Petit Palais” for the World Fair of 1900. The bridge offers a direct link between the “Invalides” and the Champs-Elysées.

11) The equestrian statue of Joan of Arc, place of the Pyramids. She is situated not far from the Gate Saint Honoré, where Joan of Arc tried to cross Charles V’s surrounding wall to reconquer Paris, occupied at the time by the English. She was hurt by an arrow in the thigh there.

12) The Puget courtyard in the Louvre.

13) Stravinsky fountain. This fountain, fountain Stravinsky or fountain of automatons, was created by the couple of artist Nikki de Saint Phalle and Jean Tinguely in 1983 and evokes the work of the composer Stravinsky.

The route of the tours: