9:03 AM – Susan and Michelle are two New-York road-runners (NY – USA). Michelle prepares at present the Marathon of Chicago. After a first visit of Paris last year, their choice was for a little bit different route.

We started near the Seine on the left bank. Look on the photo above, the new “emmarchement” in front of the Orsay Museum, “emmarchement” which is a part of the new banks of the Seine (very much enjoyed by runners).

Having crossed the pedestrian footbridge Léopold-Sédar-Senghor, run in the Garden of the Tuileries and admired the place Vendôme, we were able to cross our first covered passage, the long passage Choiseul:

Not far from there, it is with pleasure that we met the beautiful “salle Favart”, National Theater of the “Opéra Comique” :

It is the third “Salle Favart” built in 1898, both previous ones having burned.

Second covered passage on our route, the Passage of the Panoramas, the oldest passage of Paris (we had already spoken about it here) :

Just in front of the “Passage des Panoramas” is the Passage Jouffroy where a curious medieval character welcomes you:

It is about one of the numerous wax characters of the Grévin Museum, the Parisian counterpart of Madam Tussauds of London. The entrance of the museum is situated in the Grand boulevards and the exit in the Passage Jouffroy.

A little later, we found an old acquaintance, the Statue of Liberty (well, a Parisian younger sister…):

To know more about the Parisian statues of Liberty, click here.

We continued our road and again crossed magnificent passages:

These Parisian passages were approximately 150 in the middle of the 19th century, there are less than thirty nowadays. Our running allowed us to cross nine of them, among the most beautiful: 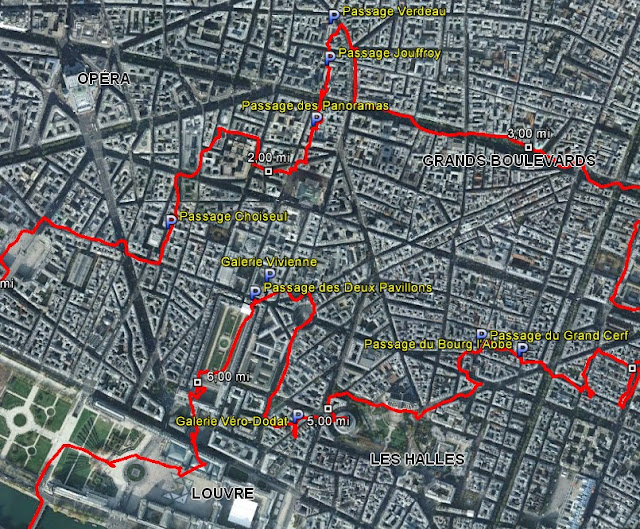 We ended the tour by crossing the beautiful garden of the “Palais Royal”, isolated from the Parisian street by its long galleries of arcades,

participated in the work of art constituted by the Columns of Buren (“Les deux plateaux” of the Artist Daniel Buren),

and made a small break in front of the Louvre before crossing again the Seine to join the Left bank.

Look on the Louvre Pyramid the sign of the Third Paradise, bound to The temporary exhibition of Michelangelo Pistoletto. 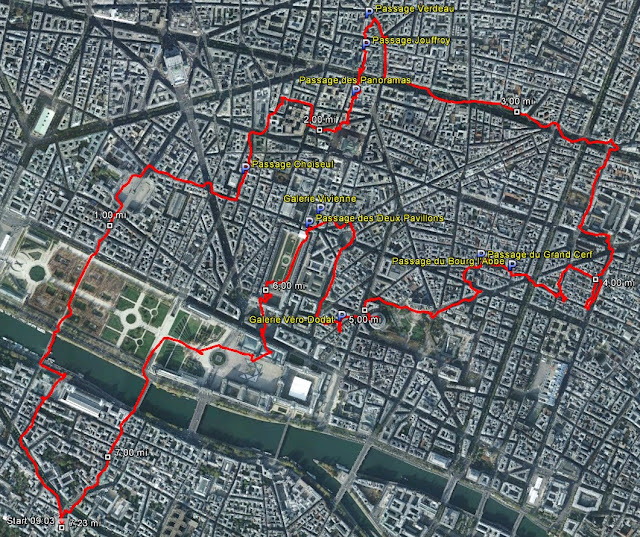 Two sports tours in Paris with Rosalie
⟨ ⟩
By reading our blog, discover examples of routes we follow with our visitors. See the photos which illustrate the places we met. As during the running tours, we enjoy to present you the stories and the anecdotes of the encountered places. Find the route at the end of articles. If you look for information about a particular place, use the Places list or the Search bar below. If these articles inspire you, contact us and we can prepare your tour according to your wishes.