10:02 AM – With Heather and Chris, runners living in Virginia (USA), we left the “place Charles de Gaulle-Etoile” to join the “Palais Royal” and its magnificent garden.

The new name is well appropriate for the location, numerous points of this place are indeed connected to the United States of America, the statue of La Fayette and Washington shaking hands, the public garden Thomas Jefferson in the center, the statue of the American dentist Horace Wells who participated in the discovery of the anesthesia, the monument to the American Volunteers (photo above), etc.

This monument pays tribute to the American volunteers enlisted in the French Foreign Legion and who succumbed by fighting during the World War I. Among them, the poet Alan Seeger.

We followed our route and enjoyed our first beautiful point of view of the Eiffel Tower, the avenue of President Wilson:

Avenue of President Wilson, a reference to the United States again. This avenue leads itself to the “Place d’Iéna” in the middle of which appears a George Washington’s equestrian statue!

New stop, in the front of the Eiffel Tower this time. Notice the ball between the first one and the second floor. It is an huge tennis ball! Indeed, it is the period of “Roland Garros” tennis tournament.

Having enjoyed the banks of the Seine and its numerous magnificent sites, we paused in the Louvre. Look at the Marly Courtyard:

In this blog, we spoke about the famous horses of Marly during a Paris visit with Mary.
After leaving the museum, we found the sun again within the magnificent garden of the Palais Royal (many roses!): 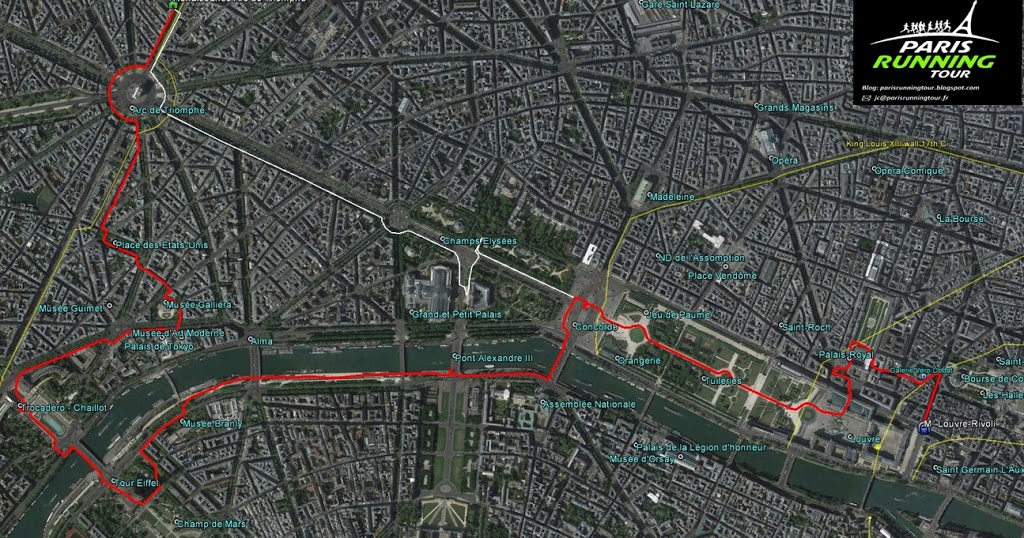 Under the sign of the French-American friendship with Cori

In front of the invisible pyramid with Molly and Saul
⟨ ⟩
By reading our blog, discover examples of routes we follow with our visitors. See the photos which illustrate the places we met. As during the running tours, we enjoy to present you the stories and the anecdotes of the encountered places. Find the route at the end of articles. If you look for information about a particular place, use the Places list or the Search bar below. If these articles inspire you, contact us and we can prepare your tour according to your wishes.