In the Latin Quarter with Erin et James

10:17 AM – Last June, we visited the Latin Quarter with Erin and James from Texas. At the end of the route, we passed by the “Pont des Arts”. But where are the famous love padlocks?
Too heavy for the bridge, Paris replaced them temporarily by panels painted by artists (while waiting for the definitive transparent panels).
Look at the photo above. The Arms of Paris were represented in a funny way, a banana for the boat and a bone for the mast!

A journalist of the Swiss Television accompanied us and realized this report:

A beautiful stroll in Paris.

We actually studied the pediment of the Pantheon. Here is the photo taken in the video:

“AUX GRANDS HOMMES LA PATRIE RECONNAISSANTE”
“TO GREAT MEN THE GRATEFUL HOMELAND” is displayed on the Pantheon, monument to the glory of the great Men of French history. The crypt welcomes a large number of famous persons, Voltaire, Rousseau, Victor Hugo, Emile Zola, Jean Moulin… Many men but only four women: Marie Curie, Sophie Berthelot (wife of the chemist), Germaine Tillion and Geneviève de Gaulle-Anthonioz, both last ones entered the Pantheon last May. One day, maybe we shall see another inscription: ” TO GREAT WOMEN AND GREAT MEN… “

Let us look closer at the pediment (in the report, we present the French Cock):

After the Pantheon, we continue our route in the Latin Quarter (Cf. meaning of the name Latin Quarter), after the beautiful “place de la Contrescarpe”, we join the Arenas of Lutèce going through a pretty flowered staircase (in harmony with the running wear!) :

In the video, we evoke Montaigne’s foot which gives luck:

The story is funny. The students actually come to caress the foot of the philosopher Montaigne and formulate a wish (success in the examinations thanks to the knowledge of Montaigne?).
Before the current bronze statue, was a marble statue. This statue was created in 1933 by Paul Landowski. Here is the photo of its inauguration:

Made with a nice white marble, the statue attracted graffitis, paint, ink, lipstick… The right foot touched permanently and unceremoniously, was broken numerous times.
The statue had to be so often restored that Paris preferred to replace it by an exact copy but with a more robust material, bronze!
Robust, well, look at the patina of the shoe…

For another story about a bronze then marble statue, look this at this article where we speak about the Statue of Louis XIII “place des Vosges”. 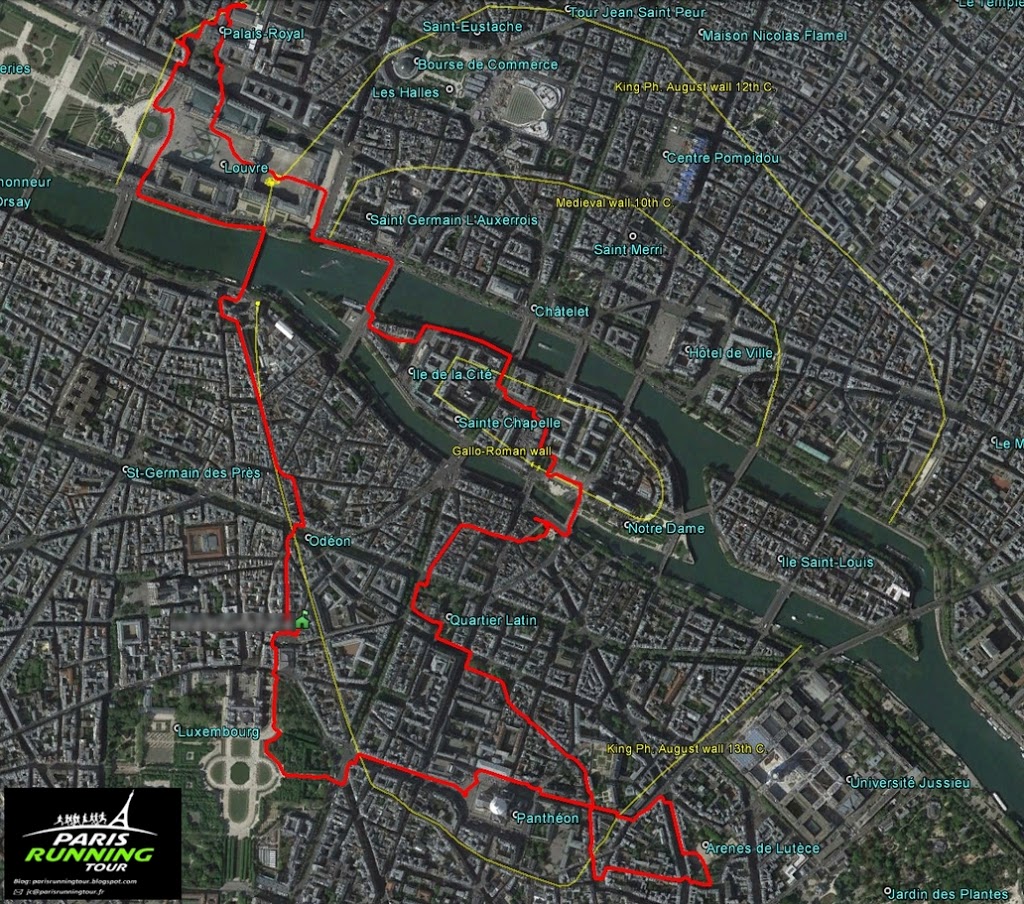 Two early morning runs to discover Paris, with Agnes
⟨ ⟩
By reading our blog, discover examples of routes we follow with our visitors. See the photos which illustrate the places we met. As during the running tours, we enjoy to present you the stories and the anecdotes of the encountered places. Find the route at the end of articles. If you look for information about a particular place, use the Places list or the Search bar below. If these articles inspire you, contact us and we can prepare your tour according to your wishes.