7:13 AM – Gustavo and Janaina live in Salvador (Brazil). To visit Paris by running, we chose a beautiful stroll around the Louvre.

We left the Grands Boulevards and went through the “passage des Panoramas” (see the previous post), the “Palais Royal”, and then we joined the Louvre, by crossing the Street of Rivoli:

Janaina and Gustavo – The Louvre, entrance to the “passage Richelieu”

The Passage Richelieu connects the street of Rivoli with the Louvre Pyramid and allows to see the beautiful sculptures of the Puget and Marly courtyards (remember the article which speaks about the horses of Marly) : 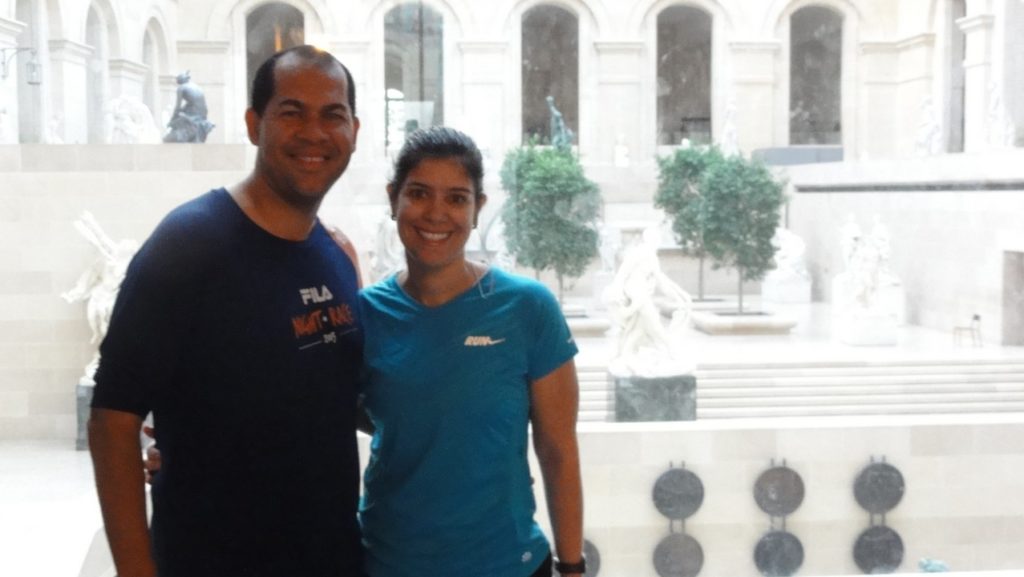 After this small break in front of the passage Richelieu windows, we continued our running at the foot of the Pyramid, the magnificent glass pyramid which respects the central space of the Louvre and allows to see the Louvre in its totality:

Gustavo and Janaina – The Louvre and the Pyramid

What was there before the Pyramid? A stand of trees where cars could park. At the foot of the trees, impossible to see all the facades:

In the same direction, towards the garden of the Tuileries, we had a photo break to take advantage of the view on the Eiffel Tower, the “Musée d’Orsay” and also some statues of Maillol. Look for them in the bushes by enlarging the photo: 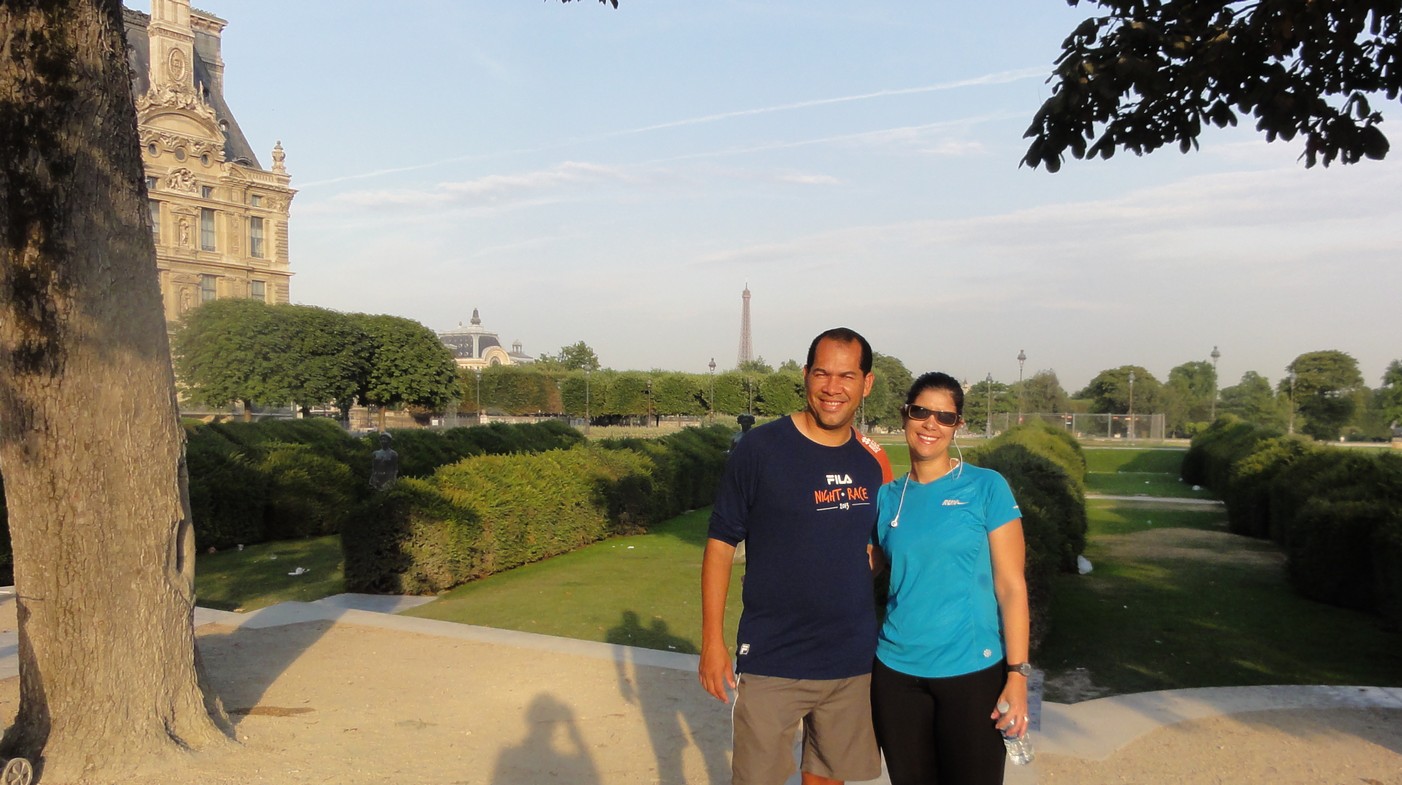 We then left the garden of the Tuileries by way of the small tunnel which goes out of the garden by going towards the river Seine. We crossed the Seine by the footbridge Léopold Sédar Senghor and going up the staircases of the bridge, where we enjoyed a beautiful point of view on Notre-Dame: 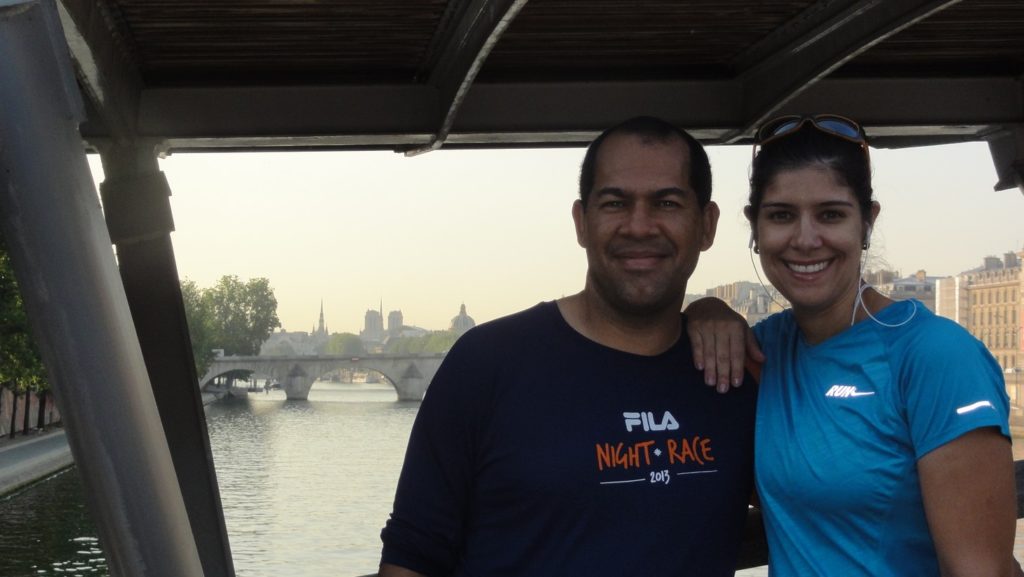 On the other side of the bridge, we saw the beautiful Palace of the Legion of Honor, cleaned recently (we had spoken about its replica in San Francisco here): 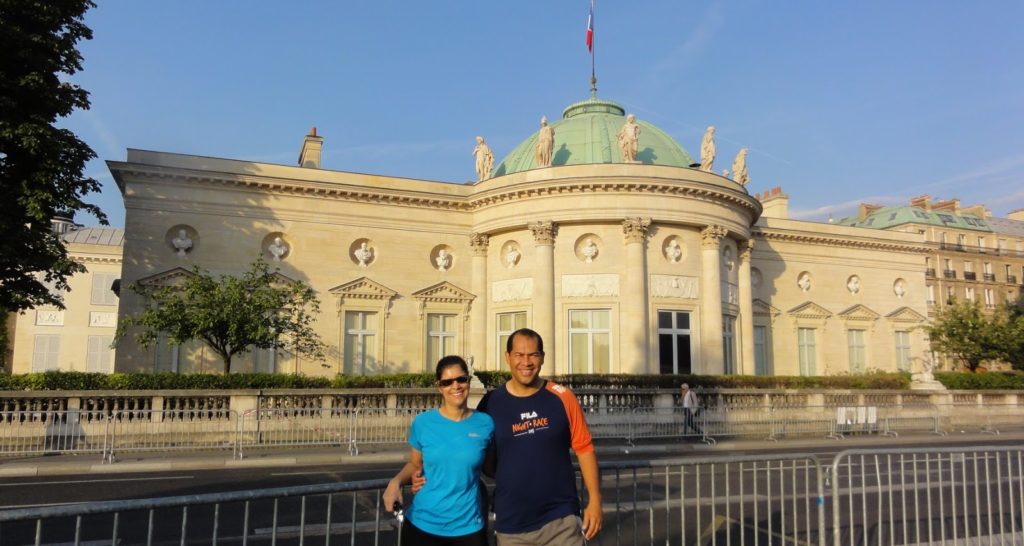 Evoking the various places to run, we spoke about the immense and long beautiful beaches of Brazil. In Paris, we also have the opportunity to have some beaches 😉
At least from mid-July to mid-August, the banks of the “Right bank”, in particular, welcome the operation “Paris-Plages“:

Gustavo and Janaina – On the “Pont Neuf”. Behind, the beautiful “Paris-Plages”sand before the opening

A little farther, near the Louvre, is the Louvre Oratory, with the Statue of the “Amiral de Coligny”, whose tragic end reminds us sad moments of the French History: 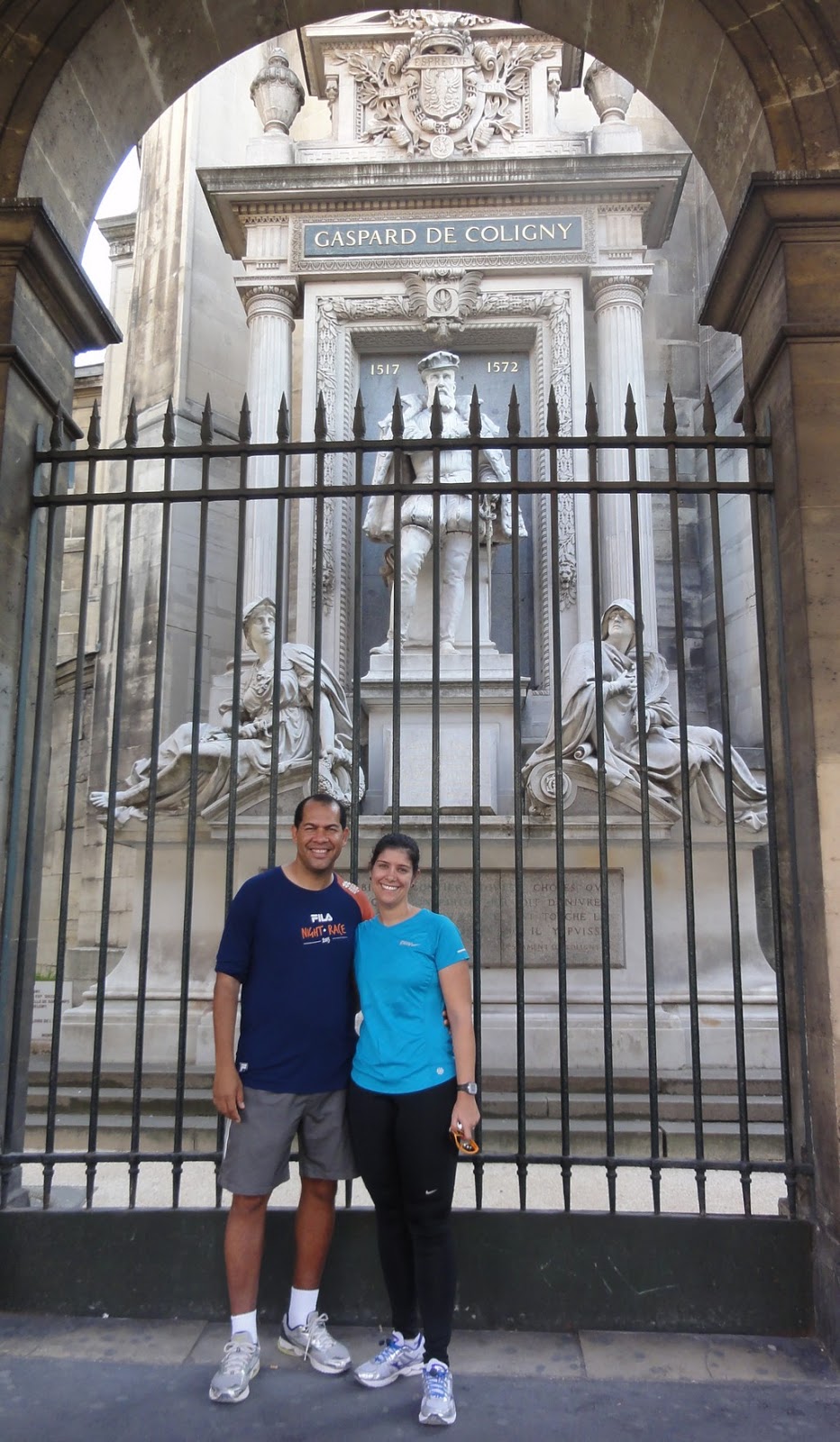 On our road, we passed by the beautiful “Véro Dodat” gallery and we were amazed by the height of a famous Parisian shoemaker’s shoes (see below, near the passage, the Christian Louboutin’s first shop): 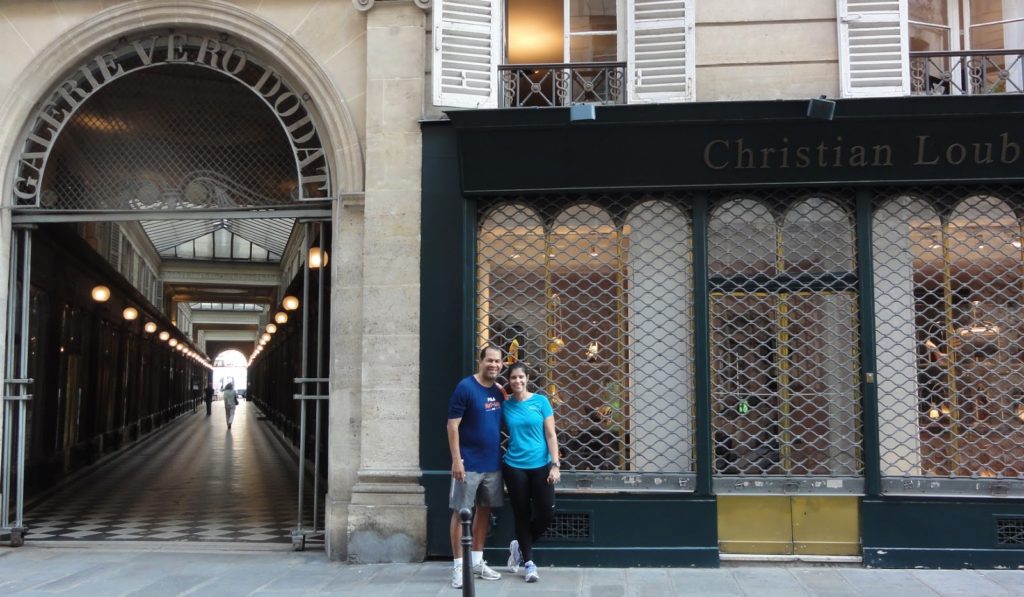 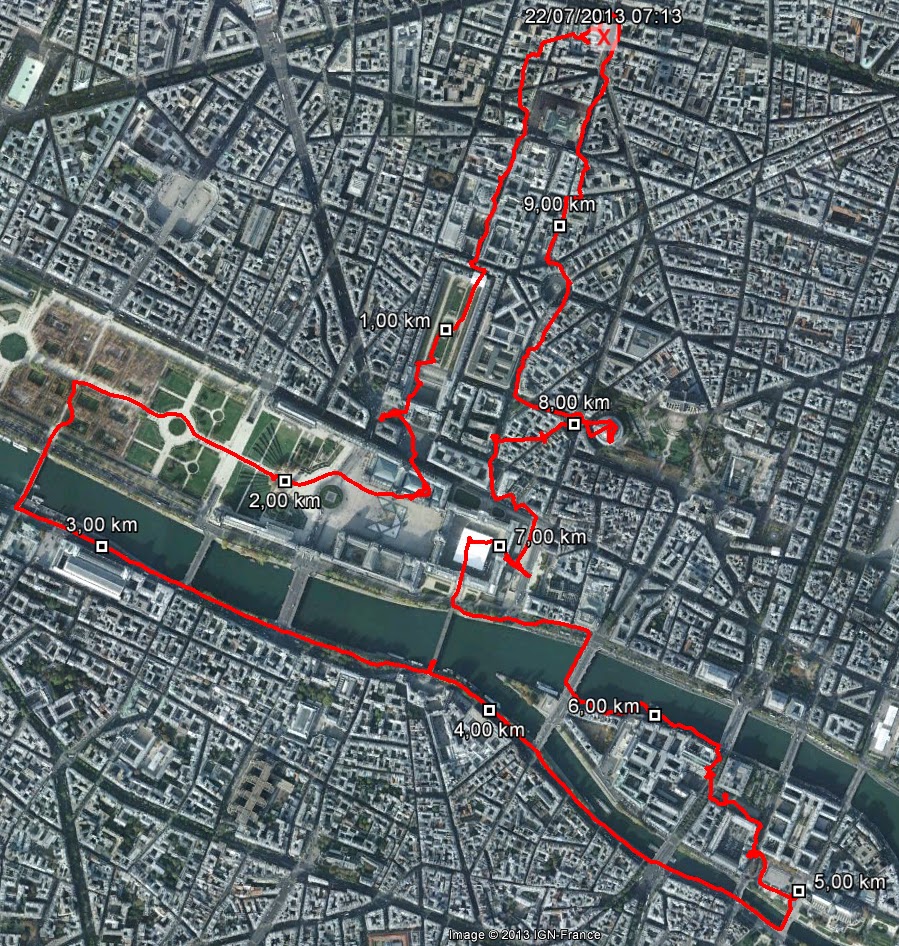 Snapshots of a first visit in Paris, with Melinda
⟨ ⟩
By reading our blog, discover examples of routes we follow with our visitors. See the photos which illustrate the places we met. As during the running tours, we enjoy to present you the stories and the anecdotes of the encountered places. Find the route at the end of articles. If you look for information about a particular place, use the Places list or the Search bar below. If these articles inspire you, contact us and we can prepare your tour according to your wishes.