7:00 AM – Karine, runner from Quebec, chose to make a Paris Running Tour to prepare the half marathon of Montreal, very close, and also, of course, to take advantage of the sports visit to discover the charm of a Parisian circuit.

What beautiful perspectives offered by the morning sun! Look at the photo above with the light beginning to enlighten the “Pont Neuf” (New Bridge), the oldest bridge of Paris (See this article).

We left early on this Sunday. At the start of the running, it was still dark. The silhouette of the Eiffel Tower appears in the dawn…

… as the Louvre, while the morning comes:

Still running towards the rising sun, we reached the Latin Quarter to meet the Sorbonne University:

The Sorbonne goes follows the “rue Saint Jacques”, former Roman way. The building which we see is the third version of the Sorbonne and dates of the 1880s. The Sorbonne University was established in the XIIIth century by Robert de Sorbon. It is in the heart of the Latin Quarter.
Latin Quarter?
Hispanic district? No, no!
In the Middle Ages, the students already came from the whole world to study there (among them, Dante, Erasmus). To speak together, a single shared language: the Latin! The passers-by eventually called the district Latin Quarter.

A little later, we cross the “Pont des Arts” (bridge of the Arts), considered as one of the most romantic of Paris (remember the Padlocks…)
What amazing perspectives on this bridge!

On the North side, the Louvre and the entrance of the “Cour Carrée” (Squared Courtyard), on the South side, the Institute of France, on the West side, the Orsay museum and the “Grand Palais” far off and lastly on the East side, the Island of “La Cité”, which cuts the river Seine with the point formed by the “Square du Vert Galant”. 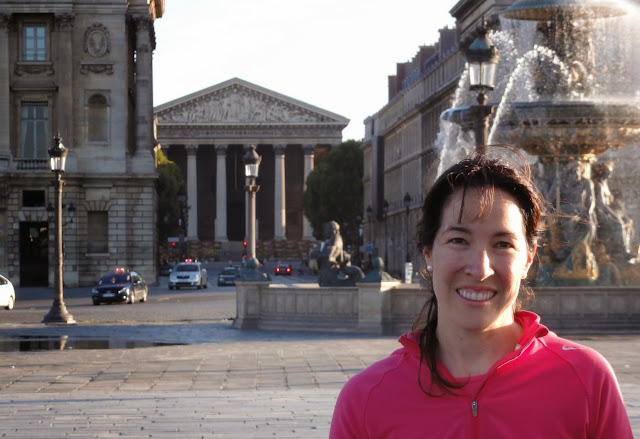 The church of “La Madeleine” and the National Assembly seem to be reflected.
This was intentional. In 1806, Napoleon the 1st adopted the project of creation of a new facade for the former Palace of Duchess Louise of Bourbon, become “Assemblée Nationale” (National Assembly).
This new Colonnade (link in French)  of the facade reminds by its columns the facade of the Madeleine which faces it.
A new axis is given to the facade forming an angle to the original axis of the Bourbon palace and finally, columns are raised by the steps of an impressive staircase so that the Bridge of “La Concorde” does not mask the sight on the bottom of the colonnade.

Paris, always in the search for the harmony! 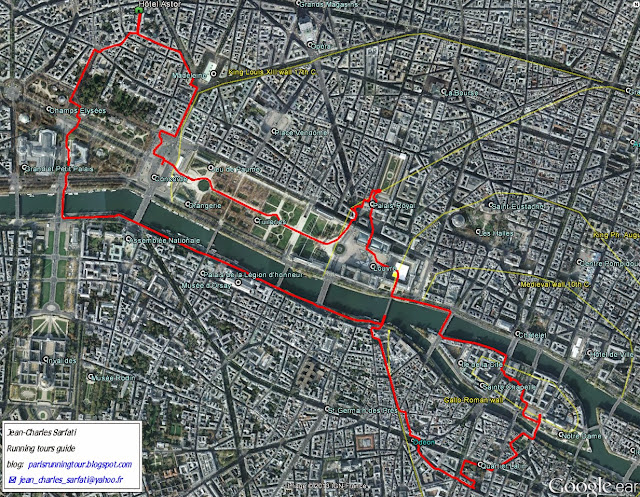 Running in Paris at the sunrise, with Denise