7h57 – Antje comes from another great and beautiful European capital, Berlin. She already ran several times the Berlin marathon, one of the fastest world marathons (the last four world records were realized in Berlin).
Antje knows well Paris and that is with pleasure and while running that we rediscovered its most beautiful “paths”. A beautiful route of more than 14 km also passing under bridges of Paris as we can see on the photo above.

Our running led us of the Eiffel Tower up to Notre-Dame, then up to the Arc of Triumph. This Friday was making the “bridge” between two holidays, May 8th&9th and the weekend so Paris was very quiet, even the Eiffel Tower seemed deserted (at least at 8 am in the morning).

Notice the scaffolds which leave the ground towards the first floor of the Eiffel Tower. These temporary elements are of use to the renovation of the first floor. The objective of this modernization project is to make this floor a more attractive place => Click here.

Back from Notre-Dame, this time, it is ON the “Pont Neuf”, the New Bridge, that we ran:

As its name does not indicate it, the “Pont Neuf”, literally “New Bridge”, is the oldest bridge of Paris. As you can read it on the photo, the bridge was built at the end of the 16th century.
Yes, “neuf” means “new” (and not “9”). Is the oldest bridge the new bridge?
Indeed, at the time of its construction, this bridge was very modern: all in stone, without houses on its edges (at last, we could know that we were really on a bridge while crossing it, impossible with houses!), and with sidewalks!
These sidewalks were really new because very rare in Paris at that time… The “Pont Neuf”, already at that time, a beautiful place to stroll, to appreciate the sight and Paris!

Farther, we pursued our route along the historic axis of Paris (see here), the Louvre, the Louvre Pyramid and the garden of the Tuileries :

We then continued our road along the Champs-Elysées to go uphill towards the Arc of Triumph. Uphill? Yes indeed, do you know that the Arc of Triumph is put on what we called formerly the “colline du Roule” (The hill of the Roule). In 1768, this hill was leveled to have a more regular slope towards the Gate of Neuilly. The top of the hill was then 5 meters higher.
Paris as flat as Berlin? Hem, not completely…
So remember, when you will take the departure of the Paris marathon and will start with the Champs-Elysées, do not run too fast: if it is so easy, it is because you are in descent! 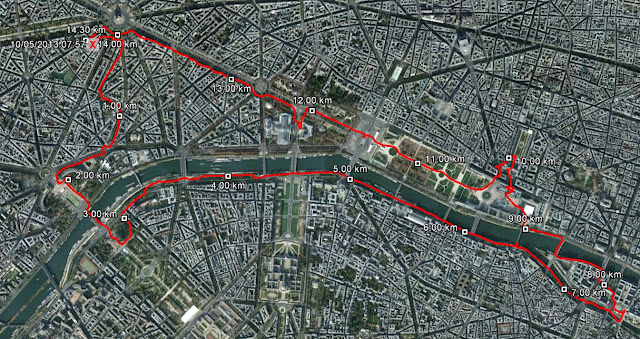