In front of the rotunda of La Villette with Felicity

3 May 2013   |  Canal Saint Martin, Grands Boulevards, Moulin Rouge, Ourcq (Canal of the), Wall of Philippe August, Wall of the Farmers-General

7:51 AM – Do you remember Felicity from Melbourne, Australia ? (See the post here.)
Two years ago, we ran along the river Seine. This time, our route led us to the North East of Paris, since Montmartre up to the Ourcq canal, then to the Saint-Martin canal and to the Grand boulevards.

The Wall of the Farmers Generals served to collect the tax on all the goods entering Paris (the “Octroi”). Its construction began before the Revolution in 1784, it was destroyed in 1860.
At the time, we thus entered Paris by passages, barriers. Most of these barriers contained buildings called “bureaux d’octroi” (“offices of granting”). 61 “bureaux d’octroi” were created by the architect Nicolas Ledoux.
There remains of these constructions among which the beautiful rotundas of the Parc Monceau and of the Villette. We can see the Rotunda of the Villette at the beginning of this article.

We then followed the Saint-Martin canal, which construction was decided by Napoleon the 1st.

Finally, back to Montmartre, we crossed the Moulin Rouge.

Contrary to the “Moulin de la Galette” (see the picture here), the “Moulin Rouge” was never a real windmill, but from the beginning, a cabaret, this famous cabaret which saw the birth of the “French cancan” and which is always in service. 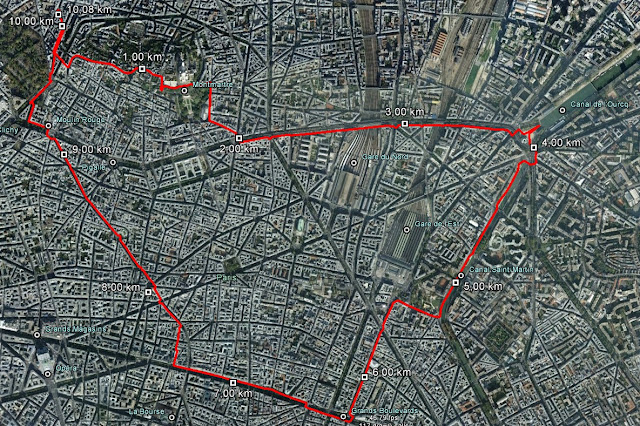 By running with Tove and Charlotte on the Ourcq Canal
⟨ ⟩
By reading our blog, discover examples of routes we follow with our visitors. See the photos which illustrate the places we met. As during the running tours, we enjoy to present you the stories and the anecdotes of the encountered places. Find the route at the end of articles. If you look for information about a particular place, use the Places list or the Search bar below. If these articles inspire you, contact us and we can prepare your tour according to your wishes.