By running with Tove and Charlotte on the Ourcq Canal

9:55 AM – Tove lives in Norway; The time of a short stay, Tove came to see her daughter Charlotte who studies in Paris. They know well Paris but wished to discover the Parisian canals. We thus began our visit by running street Lafayette, continued along the Ourcq Canal and the Saint-Martin canal and ended our visit with the “Grand boulevards” and “passages Jouffroy” and “Verdeau”.

Windows, balcony, a door, a roof… A building like any other? No, an artificial building intended to hide a huge air vent of the Parisian subway!

Having left the long Lafayette street, we exceeded the limit of the general farmers’ old wall and the barrier of the Villette with its magnificent rotunda built by Claude Nicolas Ledoux, to find the Ourcq canal.

The construction of the Canal of the Ourcq was decided by Emperor Napoleon Bonaparte in 1802. The Ourcq canal insures a supply of Paris in water by connecting the river Ourcq (more than hundred of kilometers with ten locks).

The neighborhoods of the Canal and the district of the Villette were completely renewed from the years 1970-1980, in particular by the destruction of the gigantic slaughterhouses of the Villette in 1974 and by the creation of the “Cité des Sciences” opened in 1986, of the Géode (a huge cinema) opened in 1985 and of the “parc de la Villette“.

Having turned back, we ran along a part of the Saint-Martin canal, the other beautiful canal, which joined the Seine. 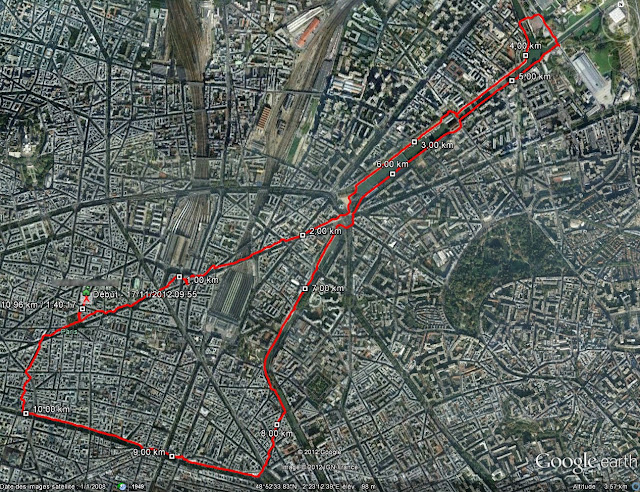 In front of the rotunda of La Villette with Felicity
⟨ ⟩
By reading our blog, discover examples of routes we follow with our visitors. See the photos which illustrate the places we met. As during the running tours, we enjoy to present you the stories and the anecdotes of the encountered places. Find the route at the end of articles. If you look for information about a particular place, use the Places list or the Search bar below. If these articles inspire you, contact us and we can prepare your tour according to your wishes.