Running in Paris at the sunrise, with Denise

6:58 AM – With Denise from Porto Allegre (Brazil), we start running early. We took advantage of the morning light to admire streets and monuments and see the city waking up. While staying near the Seine, we visited the center of Paris by alternating the right bank and the left bank: the Latin Quarter, Saint Germain des Près, the “place de la Concorde”, the Louvre, without forgetting the Island of the City (as shown on the photo above, Quay of the Clock, at the foot of the Horloge of the Conciergerie, recently  renovated).

We made a small detour on the “Pont des Arts” to appreciate the rays of the sun enlightening the West of Paris:

A little later, we found the Garnier Opera, quite enlightened by the daylight:

The avenue of the Opera, created during the works of Hausmann, had initially been planned with trees. Charles Garnier, the architect, did not want these trees. He had wished that the sight of his Opera was completely unobstructed. Without trees, the Opera is indeed very visible since the place André Malraux near the Louvre.

A little farther, we met two buildings. They are alike, right?
If they have the same architecture, they have nevertheless very different uses. One is a public building: the City hall of the 1st district and the other one, a religious building: the church Saint-Germain-l’Auxerrois.
This group owes its existence to a particular history:
August 24th, 1572, in full religious war, bells of this very old church gave the order to eliminate all the Protestants of Paris. This signal was the beginning of the horrible Saint-Bartholomew’s massacre.
In the 19th century, town planners made the project to extend eastward the historic axis Louvre-Tuileries-Concorde-Champs Elysées. It should cause the destruction of the church.

The baron Haussman, in charge of the big Parisian works, refused.
Indeed, as he was Protestant, he did not wish that people can interpret the destruction of the church as a personal vengeance.
He also asked for the construction of a city hall, completely similar to the church, by concern of harmony. He made raise between both buildings a tower-bell to strongly separate the “religion” and the “republic”.
Parisians, derisive, called the group “L’huilier et ses deux burettes” (the hand oiler and the two cruets).

We finished our running by way of the Island of the City and the Latin Quarter.
About 11 km, sports and instructive! 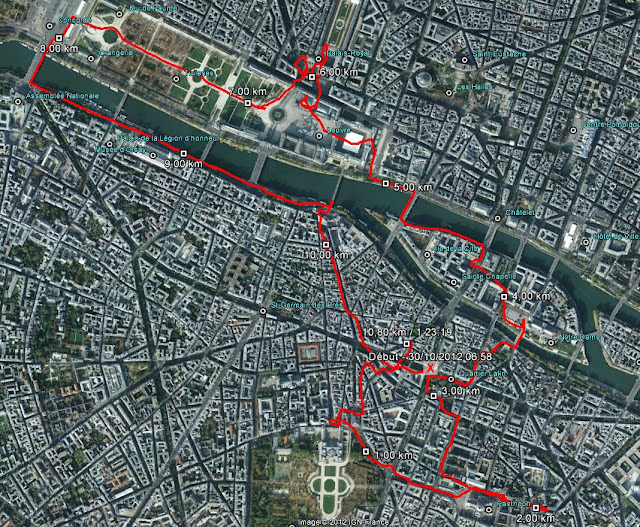 Center of Paris, right bank with Liz and Curt
⟨ ⟩
By reading our blog, discover examples of routes we follow with our visitors. See the photos which illustrate the places we met. As during the running tours, we enjoy to present you the stories and the anecdotes of the encountered places. Find the route at the end of articles. If you look for information about a particular place, use the Places list or the Search bar below. If these articles inspire you, contact us and we can prepare your tour according to your wishes.