At the “Champ de Mars” with Sylvie

8:00 AM – Sylvie from Montreal (Canada) came to Paris for a short stay. We took advantage of this morning run to do a nice visit of Paris. On this Friday morning, the cold weather arrived to Paris. Having dressed our winter runners’ clothes, we ran along a buckle of 10 kilometers by way of the “esplanade of the Invalides”, the Tuileries, the Champs Elysées.

At the end of the tour, we passed by the “esplanade of the Palais de Chaillot”, one of the best viewpoints to contemplate the Eiffel Tower. After a small break to make a “photo-souvenir”, we joined the “Champ de Mars” by way of the Iéna bridge.

In the Champ de Mars, we were welcomed by very nice bears:

These 140 Buddy Bears represent the 140 countries recognized by United Nations. They wish to present the art of the tolerance and symbolize the idea of a world in peace in the future.

Come to Paris to admire these works of Art and Peace united! 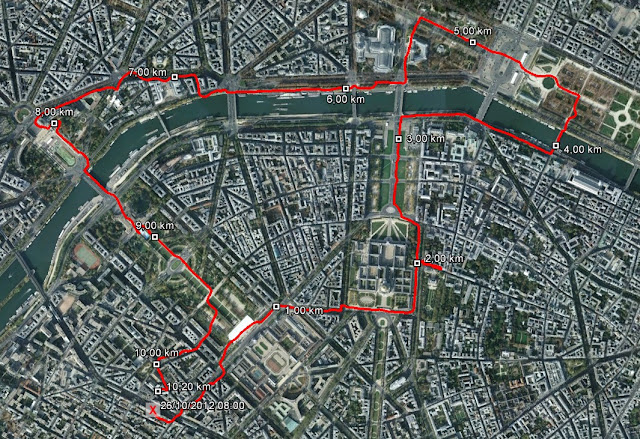 At the Champ de Mars with Janet

A brightened up week end in Paris with Anne and Niels
⟨ ⟩
By reading our blog, discover examples of routes we follow with our visitors. See the photos which illustrate the places we met. As during the running tours, we enjoy to present you the stories and the anecdotes of the encountered places. Find the route at the end of articles. If you look for information about a particular place, use the Places list or the Search bar below. If these articles inspire you, contact us and we can prepare your tour according to your wishes.