A brightened up week end in Paris with Anne and Niels

7:30 AM – Saturday and Sunday – Anne and Niels, from Copenhagen (Denmark), as regular marathoners, chose to run with Paris Running Tour two times, Saturday morning and Sunday morning. We were lucky, despite a rather cold weather, we ran under a fantastic sunlight, which allowed us to fully enjoy our tours.

On our way, we saw the “Invalides” (see the picture below), the “Ecole Militaire” (Military school) and ran through the “Champ de Mars“; all these places are linked to war.
The Hotel des Invalides was created at the request of Louis XIV to house and take care of injured, maimed or old soldiers (one reason often evoked: Louis XIV liked the glory of his victorious wars but not the – not so glorious – aftermaths in terms of maimed soldiers wandering in the Parisian streets). Inside the Invalides, you can see the tomb of Napoleon.

Not so far from the Invalides, the Ecole Militaire founded by Louis XV. Its aim was to educate young (and poor) officers. As the Invalides, it still belongs to the Ministry of Defense.
Between the Ecole Militaire and the Eiffel tower, you find a park, the “Champ de Mars“, literally the Field of Mars, Mars being the Roman god of war. It was called “Champ de Mars” by the Romans when they defeated the Gauls there and took Paris (called Lutecia at this period).

The routes of the tours (Saturday and Sunday): 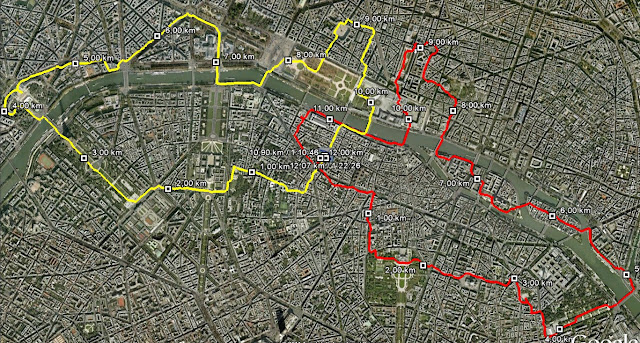 Running 25 km under the sun of Paris, with William

Historic, artistic, scientific and sports stroll in Paris with Isabel
⟨ ⟩
By reading our blog, discover examples of routes we follow with our visitors. See the photos which illustrate the places we met. As during the running tours, we enjoy to present you the stories and the anecdotes of the encountered places. Find the route at the end of articles. If you look for information about a particular place, use the Places list or the Search bar below. If these articles inspire you, contact us and we can prepare your tour according to your wishes.