Along canal Saint-Martin and river Seine with Kristina

7:30 AM – Saturday and Monday – Kristina, from Freising (Germany), is a regular runner. As Anne and Niels, she decided to fully enjoy Paris while running, choosing to  run twice with Paris Running Tour, Saturday and Monday morning.
First tour, a jogging along the canal Saint Martin, following the “Quai de Valmy”, the “Quai de Jemmapes”, going by “la place de La Bastille” and along the Arsenal Marina.
Second running tour, a run along the Seine, enjoying the “Ile de la Cité” with Notre Dame, La Sainte Chapelle and La Conciergerie, afterward the left bank, then after admiring the Musee d’Orsay, the right bank and back to the start, through “Les Tuileries” and “Le Louvre”.
On our way, La place des Vosges:
The king Henri IV created “La place Royale” at the beginning of the 17th century. This squared place was conceived with a rigorous architectural design (same style for each house, arcades and pillars, …) The place inspired many European residential squares.
In 1799, when was raised taxes to support the campaigns of the Revolutionary armies, “Les Vosges” was the first department to pay (department in the east of France); Paris thanked “Les Vosges” naming the square “La place des Vosges”.
Many famous persons lived there, as Victor Hugo (you can visit his house).
Merci Kristina!

The routes of the tours (Saturday and Monday ): 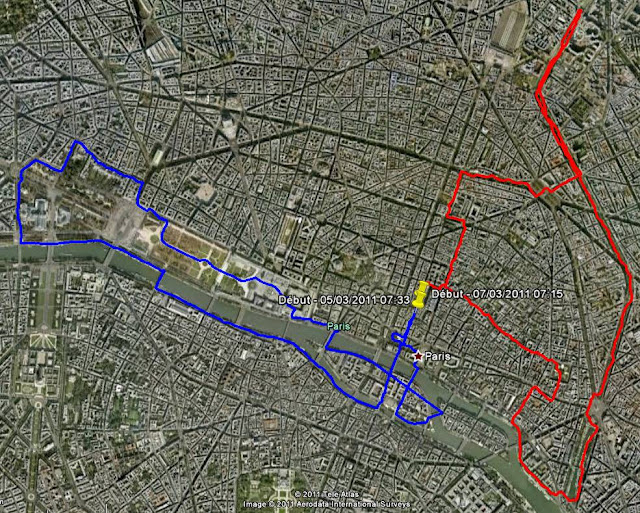