In front of the Commercial court of Paris with Dave

Thursday 1st May – 8:03 AM, Monday 12th May – 8:01 AM – Dave comes from the beautiful city of Ottawa in Canada.
Two mornings to discover Paris in a sports way. A dive through the different layers of history which offers Paris.
Paris is a city which was never destroyed contrary to Berlin (at the end of the war in 1945), Lisbon (earthquake of 1755) or London (fire of 1666), other leading cities.
Paris can thus present as well Roman vestiges as buildings of the Middle Age either the numerous royal creations (among others!). Succession of architectural fashions, urbanistic traditions and most of the time a research for urban harmony.

See, for example, above, the Commercial court (“Tribunal de Commerce”), in front of which we stopped. Let us look at it just in front:

Something bizarre, no?
The dome is not in the center of the building but on the right side!
Architect’s whim? No, will of urban harmony. The dome is so placed to close on the South side the perspective of the Boulevard Sevastopol (perspective ended in the North by the train station of “Gare de l’Est”).
The Commercial court is finished in 1864 while the Boulevard is inaugurated in 1858.

Look at the precise alignment of the boulevard and the court:

Let us pursue our running in the Middle Age Paris, with the magnificent Abbey of Cluny, now the National Museum of the Middle Age (and its Lady and the Unicorn famous tapestries):

and the two old houses of the street François Miron:

Look at the wooden beams of the facade. These facades are rare in Paris. In fact, some old Parisian Middle age houses are hidden by renovations of facade.
In 1967, The timber framings which we see here were cleared of the plaster which recovered them.
Look at the buildings at the beginning of the 20th century:

Indeed, in 1607, protective measures against the fires were decreed, in particular the obligation to cover with plaster timber framings (these measures were strengthened in 1667 because of the big fire of London in 1666!)

Now, let us admire the beautiful perspective offered by the Soufflot street: 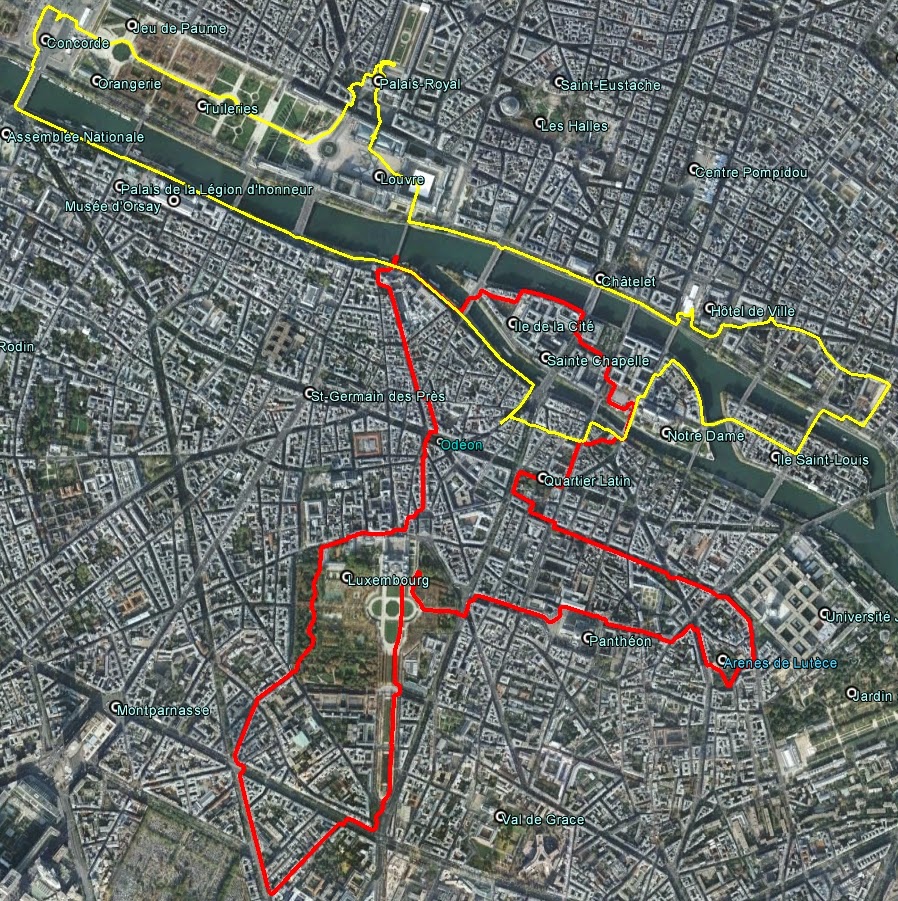 In front of the renewed Conciergerie with Greg
⟨ ⟩
By reading our blog, discover examples of routes we follow with our visitors. See the photos which illustrate the places we met. As during the running tours, we enjoy to present you the stories and the anecdotes of the encountered places. Find the route at the end of articles. If you look for information about a particular place, use the Places list or the Search bar below. If these articles inspire you, contact us and we can prepare your tour according to your wishes.