In front of the renewed Conciergerie with Greg

7:01 AM – Greg lives not far from Chicago. At this rather rainy end of spring in Paris, we were lucky to have a pleasant sun on this Sunday morning. We ran by crossing a circuit which led us of the Discovery Palace to the Pantheon, by way of the Conciergerie.

Important works, which lasted more than one year, allowed to renew completely the Conciergerie. Until recently, the Conciergerie was covered with scaffolds that hid gigantic advertisements.
We were thus able to discover the beautiful Conciergerie, with clean and clear walls. The roof of the “Tour de l’Horloge” (Clock tower) was redone, it is now golden:

The Conciergerie belonged to the Palace of “la Cité”, residence of kings of France in the Middle Ages, palace which succeeded to the Roman Emperors palaces in Paris.
The palace was abandoned by kings at the end of the fourteenth century, the Conciergerie became then a prison, the most famous prisoner being queen Marie-Antoinette.

Conciergerie? Concierge? Yes, the word comes from there. The Concierge was an important person appointed by the king to maintain the order, manage the police, take care of prisoners, do the justice… He lived in the Conciergerie.
The word Concierge comes from the Latin word Conservius, “companion of slavery”, the one who serves the Palace.
Nowadays, we use now the term “Conciergerie” to name the whole palace.


On the way, we noticed the numerous flags on public buildings, as we can see on the photo of the Pantheon below:

Yes, Sunday, June 17th, 2012 was day of elections in France, the second ballot of the general election.

Visit the Pantheon, this temple dedicated to the persons celebrated by the Nation. In the crypt, we find, among others, the graves of Voltaire, Rousseau, Victor Hugo, Marie Curie. The ground floor exposes the paintings which describe the life of Geneviève, protector of Paris. Do not miss to rise to the dome which offers a magnificent view on Paris.

Look at the pediment, so allegorical. In the center, the Nation, with on its right, the Freedom and on its left, the History.
On the side of the Freedom, the heroes of the civil order celebrated by the Revolution. Among them, you can find Voltaire and Rousseau, sat.
On the side of the History, is the military order. We can see the young Bonaparte, future Napoleon 1st.

A beautiful running before the opening of polling stations! 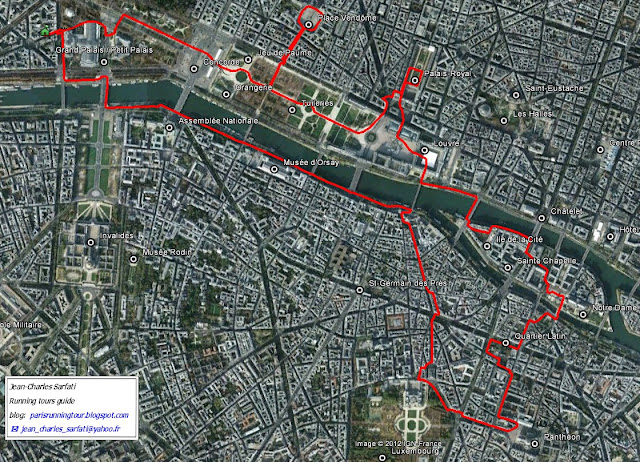 In front of the Commercial court of Paris with Dave
⟨ ⟩
By reading our blog, discover examples of routes we follow with our visitors. See the photos which illustrate the places we met. As during the running tours, we enjoy to present you the stories and the anecdotes of the encountered places. Find the route at the end of articles. If you look for information about a particular place, use the Places list or the Search bar below. If these articles inspire you, contact us and we can prepare your tour according to your wishes.