How many Arcs of Triumph in Paris? With Adam and Bridget 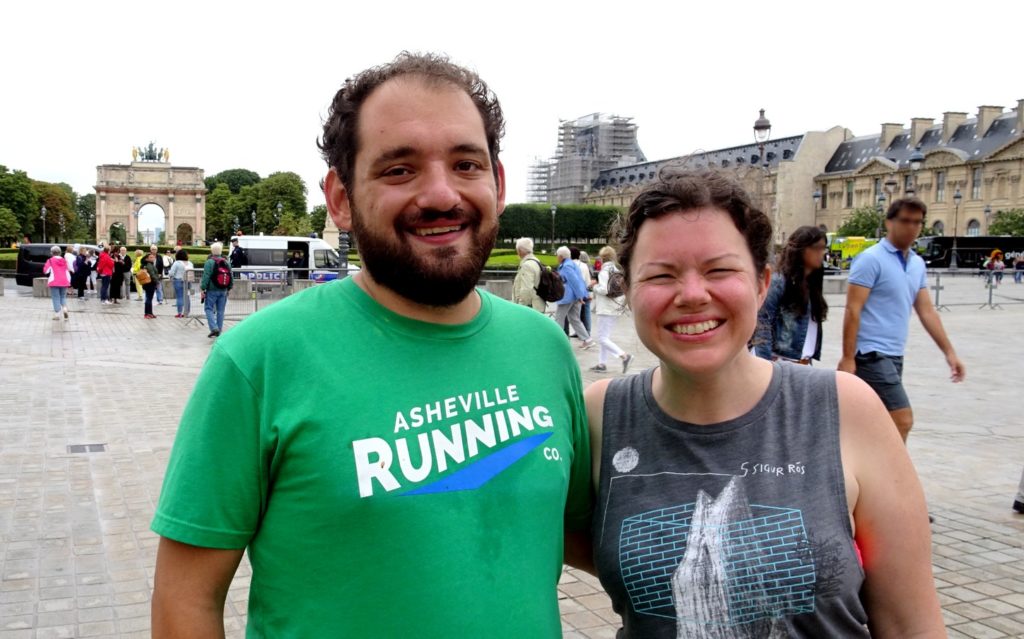 Adam et Bridget at the begginning of the historical axis Paris

Adam and Bridget (Philadelphia) began their vacations in Paris with a sport discovery of the City. Paris Running Tours prepared them a tour which included well-known historical places and also spots and buildings less famous but still fascinating. Running while visiting offers the possibility of seeing many district and understanding numerous aspects of the city.

The photo above is taken at the start of what we call the “Historical Axis of Paris“. Do you know where exactly is the spot which starts this perspective?
We already spoke about this axis during the visit of Juliana and Pedro in 2012. You can also directly look at the track of this axis in the image we created (Click on it for all the details). 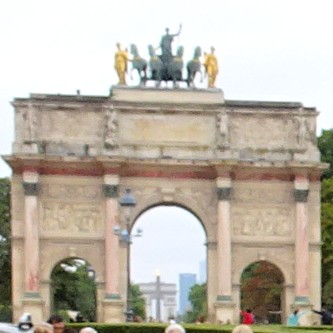 What do we see in its center? The Arc of Triumph of Charles de Gaulle square (“Place de l’Étoile”), it gives two Arcs.
These two Arcs were built at the request (and for the glory) of Napoleon 1st.
If we get closer to the Arc of Triumph, for example in the middle of the Garden of the Tuileries and we look at the center of the Arc of Triumph, we can see far away another Arc, newer this time, The “Grande Arche de la Défense”. It gives three Arcs.

Look, in the right of the first photo of the article: 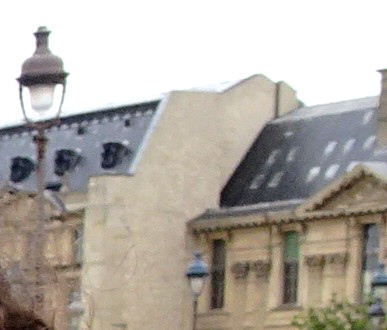 This separation marks the city wall of the King Charles V. If you continue on the track of this wall you will join what we call the “Grands Boulevards”. It is precisely the place we are going with Bridget and Adam. The “Grands Boulevards” replace this protective wall created by Charles V and then completed on the West by Louis XIII.
Later, the King, saying that he was able to defend his country (and even more…), had this wall destroyed to give what will become “les Grands Boulevards”. To replace the entrances in the North of the City, the Doors of Paris, he had two Arcs built, the “Arc de la Porte Saint-Martin” and the “Arc de la Porte Saint-Denis“: 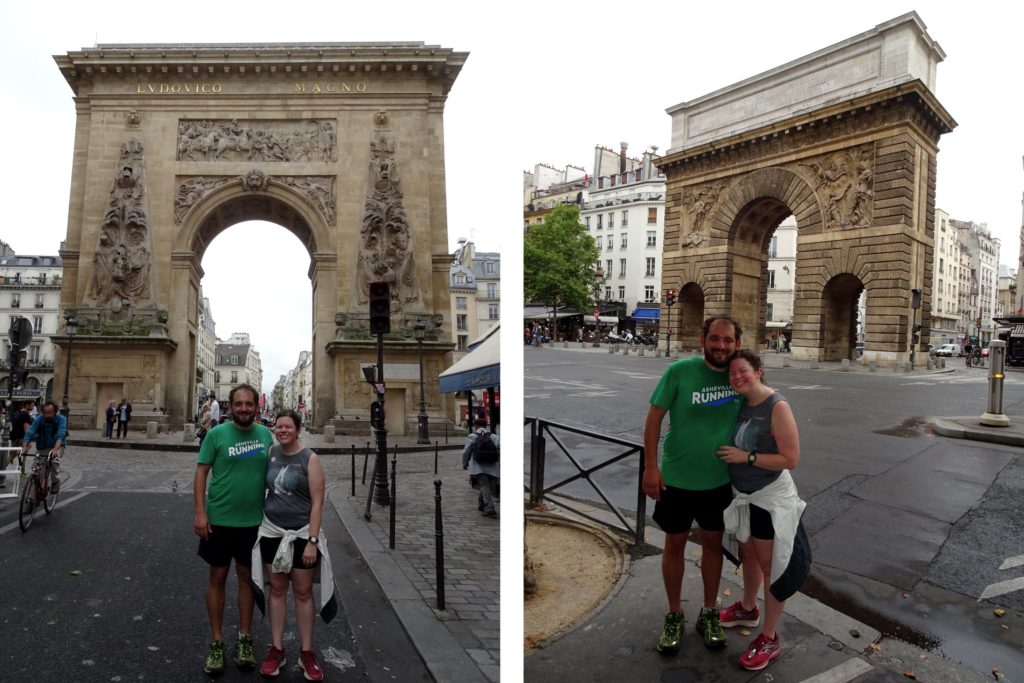 Two additional Arcs, it gives 3+2 = 5!
5? The “Grande Arche de la Défense” not being in Paris, it gives 4. Therefore we have Four arcs of Triumph in Paris.
But, by the way, who is this King who built these two “Doors”? You can read “LUDOVICO MAGNO“, Louis the Great, Louis XIV, the Sun King!
Admire the sculptures, all for his victories and his glory. He dominates his enemy, buried under the ground, or the defeated peoples come to give him the keys of their cities:

Not far from the Grands boulevards, we discover a nicely decorated pediment, with in the vignettes, the five continents and lower, the Prudence which holds the mirror of the Truth: 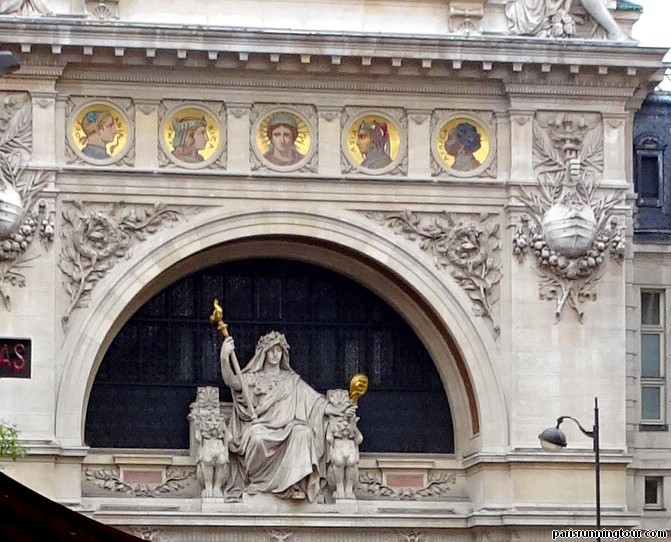 But what is this building? 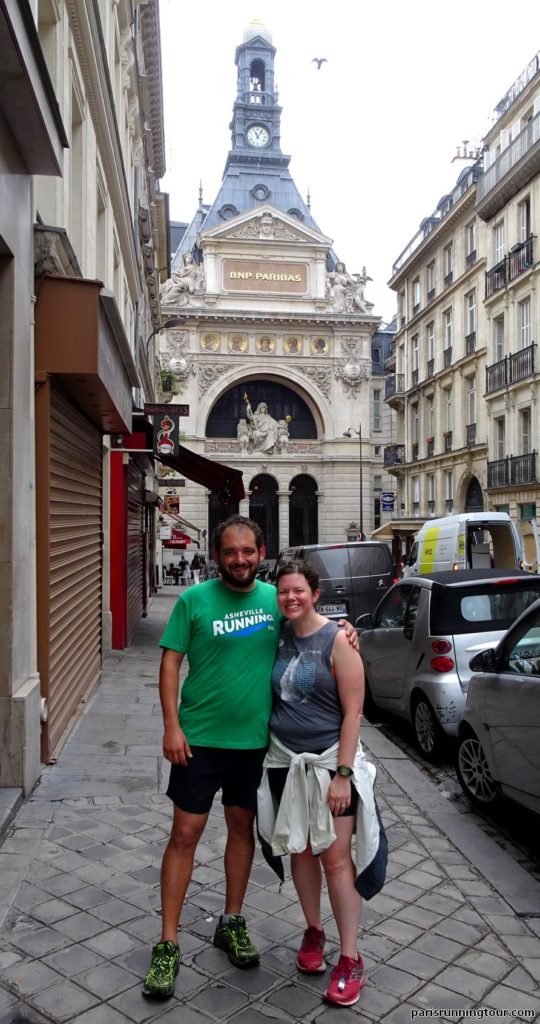 Memories of 2017, very good moments with our visitors (3/3)
⟨ ⟩
By reading our blog, discover examples of routes we follow with our visitors. See the photos which illustrate the places we met. As during the running tours, we enjoy to present you the stories and the anecdotes of the encountered places. Find the route at the end of articles. If you look for information about a particular place, use the Places list or the Search bar below. If these articles inspire you, contact us and we can prepare your tour according to your wishes.