6:51 AM – Maggie, who lives near Houston, runs very regularly. Early on Sunday, we ran on the West part of the Paris historical axis (map here), from “La Défense” up to the Arc of Triumph.

We thus left “La Défense” to cross its esplanade, the city of Neuilly, the avenue of the “Grande Armée” and join the Arc of Triumph on the “Place de l’Étoile” (place of the Star).

We went around the “Arc de Triomphe”, admired the other part of the historical axis: Champs-Elysées, far off, the obelisk of “La Concorde” then, at the end, the Louvre (on the photo above, by enlarging it, we can see the Obelisk and the buildings of the Louvre far off).

On returning to “La Défense”, we were able to appreciate some of the numerous works of art arranged on the Esplanade, as “the pond of Takis” created by Vassilakis Panayotis Takis:

By the way, do you know why this business area is called “La Défense”?
In 1883, the Statue of the defense of Paris was placed on a traffic circle of Courbevoie, one of the cities where is situated the business center. The statue evokes the resistance and the bravery of the Paris defenders during the 1870 French-Prussian war.
See below “La Défense” in the debuts of the business center developments (begun with the CNIT):

A little run of 10 km through space and time! 😉 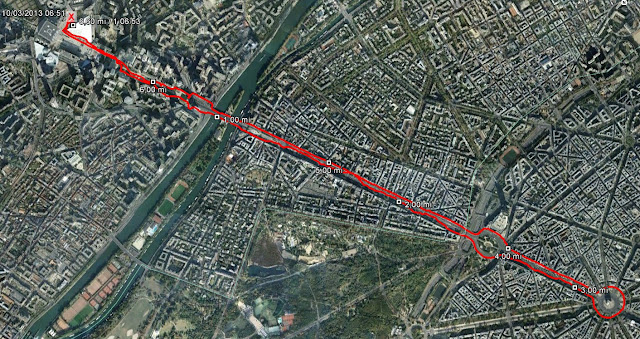 How many Arcs of Triumph in Paris? With Adam and Bridget

In Paris, under the pink morning light with Amy
⟨ ⟩
By reading our blog, discover examples of routes we follow with our visitors. See the photos which illustrate the places we met. As during the running tours, we enjoy to present you the stories and the anecdotes of the encountered places. Find the route at the end of articles. If you look for information about a particular place, use the Places list or the Search bar below. If these articles inspire you, contact us and we can prepare your tour according to your wishes.