9:07 AM – Meredith and John come from the East coast of the United States (Washington, New York) and are in Paris for a cultural and very sports visit.
This Monday, March 4th, we combined a tourist stroll and and “recovery jogging”. Indeed, Meredith ran the day before, the Paris half marathon by establishing a new personal record on the distance. Bravo Meredith!

That is thus, quietly, that we crossed Paris and took advantage of the beautiful morning, second brightened up morning after a very cold and dark winter.

On the photo above, we see clearly the “pyramidion” (pyramid cover cap) at the top of the Obelisk, its gold cover shines as in the time of antique Egypt.
Did you also know that the Obelisk of “Place de la Concorde” represented the gnomon (the needle) of a gigantic sundial? Had you noticed these marks on the ground?

By continuing our running, we returned on the historic axis, with in its beginning, the Louvre:

It is in this way that we admired the oldest monument of Paris, the obelisk of Concorde (13è century BC) and one of the most modern, the Louvre Pyramid (inaugurated in 1989)! 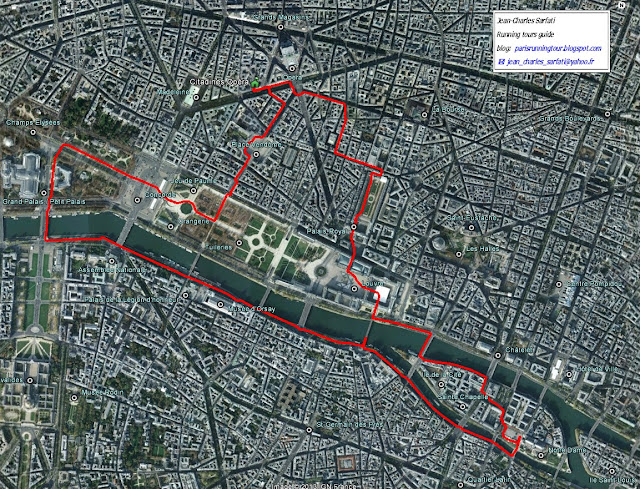 How many Arcs of Triumph in Paris? With Adam and Bridget
⟨ ⟩
By reading our blog, discover examples of routes we follow with our visitors. See the photos which illustrate the places we met. As during the running tours, we enjoy to present you the stories and the anecdotes of the encountered places. Find the route at the end of articles. If you look for information about a particular place, use the Places list or the Search bar below. If these articles inspire you, contact us and we can prepare your tour according to your wishes.