In front of the oldest tree of Paris with Michael

9:01 AM – Michael, who lives in Hamburg (Germany), began his first visit of the capital by a Paris Running Tour.

Having left the district of the “Gare de Lyon”, we traveled the garden of Plants, crossed the Latin Quarter on the left bank, visited the Island of “La Cité”, then of return on the right bank, saw the Pompidou Center and the “Marais” quarter.

We discovered in particular the Gallo-Roman Paris by admiring the Arenas of Lutecia, the Roman Thermal baths and the archaeological crypt where we can see real Roman streets.

Before leaving the Latin Quarter, in the Public garden René Viviani, we greeted the oldest tree of Paris (we can see it on the photo above). This Black Locust tree (Robinia pseudoacacia) was planted in 1601 by the botanist Jean Robin who introduced it in France (the tree is native of North America).

The public garden René Viviani faces the Cathedral Notre-Dame-de-Paris as we can see on the photo below:

A little earlier, it is another place of worship we crossed, the Big Mosque of Paris:

The Big Mosque of Paris was inaugurated in 1926. Of Spanish-Moresque style, it possesses a 33 meter minaret. The Mosque is opened to the tourist visits.

On the right bank, very close to another “temple”, “temple” of the culture this time, the Georges Pompidou Contemporary Arts Center, we contemplated beautiful mural paintings, of which the stencil “Chuuuttt!!!” of Jef Aérosol:

In the “Marais”, we took a shortcut which made us, directly from the street Saint Antoine pass on the beautiful “Place des Vosges”:

A magnificent shortcut, the Hotel of Sully! This “Hôtel particulier” (mansion) allows to join the “place des Vosges” by way of the inside courtyard and the garden. Built at the beginning of the 17th century, it was the property of the “Duke de Sully”, king Henri IV’s Minister of Finance. It shelters now the Center of the National Monuments. 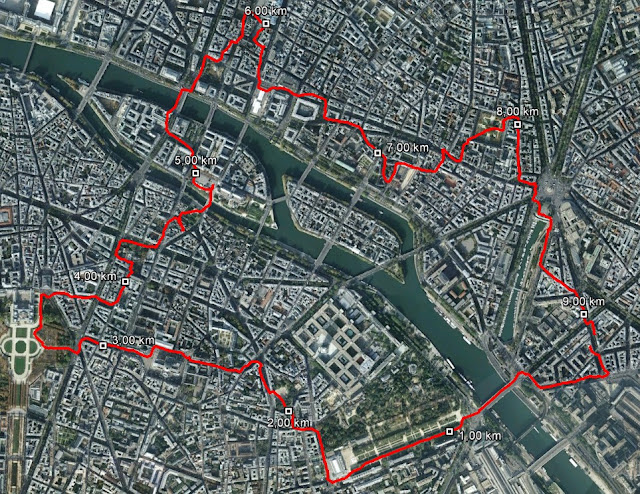