8:08 AM – It was a great pleasure to meet Anne and Niels from Denmark again. We had run together during a rather cold March, two tours in Paris, for the greater part on the left bank.

This time, in this warm day of August, we chose the right bank and followed the plan of the ancient Paris surrounding wall of King Louis XIII, path which constitutes largely what we name “Les Grand boulevards”.

To join the Grand boulevards, we went through some of the numerous covered passages of Paris, in particular the “passage des Panoramas”:

Deserted passage on a Sunday morning and thus usable by the runners!
The passage of the Panoramas is one of oldest covered passages of Paris, created in 1799 and doubtless inspired by the oriental souks… The name “panoramas” comes because the main entry was framed by two towers where were exposed panoramic landscapes representing big cities, panoramas.


On the Grand boulevards, we admired two big triumphal arches commissioned by king Louis XIV: the “Porte Saint-Martin” (1674) and the “Porte Saint-Denis” (1672).
Both arcs were built to the glory of Louis XIV and of his victories and replaced the fortified doors become useless, Charles V’s wall being replaced by the Boulevard.

We then left the Boulevard to find the “Place des Vosges”:

Look closer at the Louis XIII’s statue. To replace the former bronze statue, melted during the Revolution, the sculptors chose the marble, indeed much heavier…
The statue threatening to collapse in its center, it was decided to place a trunk under the horse’s belly. It gives a very strange look to this equipage, slowed down in its center by a tree trunk! 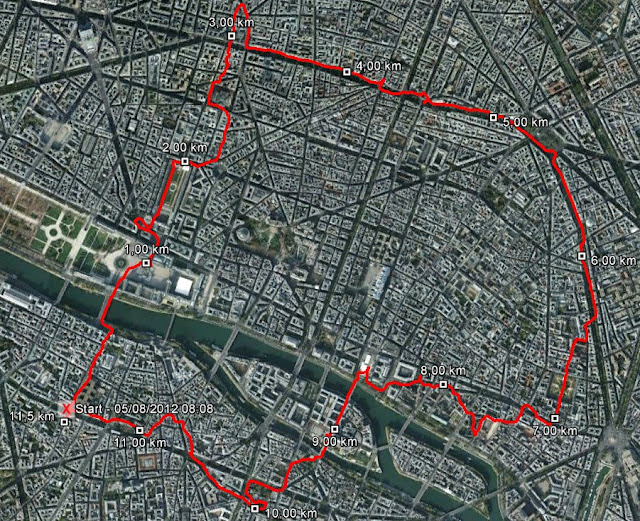 By way of the gallery Véro-Dodat with Erin and Jaymi

At the top of Paris with Bart after a sports ascent

A nice long tour with Brenda and Kevin
⟨ ⟩
By reading our blog, discover examples of routes we follow with our visitors. See the photos which illustrate the places we met. As during the running tours, we enjoy to present you the stories and the anecdotes of the encountered places. Find the route at the end of articles. If you look for information about a particular place, use the Places list or the Search bar below. If these articles inspire you, contact us and we can prepare your tour according to your wishes.