By way of the gallery Véro-Dodat with Erin and Jaymi

8:55 AM – With Erin from Miami (USA) and Jaymi from San Francisco (USA), we left the “Porte d’Orléans” at the south end of Paris to run toward the center of the city, cross the Louvre, then return by a parallel route.

In its entrance, south side, we met the Fountain of the Four Parts of the World, as we can see it on the photo above, behind the pond. This bronze fountain, realized by several artists from 1867 till 1874, symbolizes the four Continents, Africa, America, Asia and Europe (Oceania not being represented).
We also name this fountain the Fountain Carpeaux, Jean-Baptiste Carpeaux having sculptured the women who represent the continents.
We are in the axis of the meridian of Paris. In the background of the photo, we recognize the Paris Observatory, created in 1667.

By running northward, in the Latin Quarter, we crossed the Hotel of Abbots de Cluny, where resides, nowadays, the Museum of the Middle Ages:

It is at the Museum of the Middle Ages that we can admire the magnificent Tapestries of the Lady and the Unicorn .

Of return southward, we entered the beautiful gallery Véro-Dodat, a passage created in 1826. For the amateurs of fashion, it is at the end of the gallery that one of the most famous mode shoemakers created his first shop. Shoes with very high heel, incompatible with the running…

We went to finish our running by way of the beautiful Montsouris Park, of which the construction was decided by the baron Haussmann in 1860 to match in the South the Park of the Buttes Chaumont, the other big garden in the North of Paris. 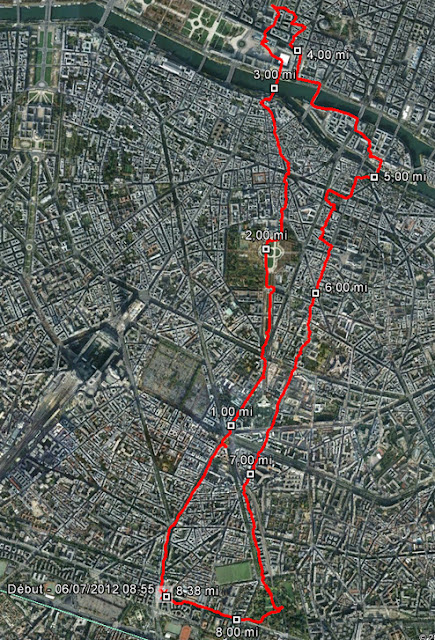 A personalized tour? What shall I discover of Paris? Known and unknown sites

At the top of Paris with Bart after a sports ascent

A nice long tour with Brenda and Kevin
⟨ ⟩
By reading our blog, discover examples of routes we follow with our visitors. See the photos which illustrate the places we met. As during the running tours, we enjoy to present you the stories and the anecdotes of the encountered places. Find the route at the end of articles. If you look for information about a particular place, use the Places list or the Search bar below. If these articles inspire you, contact us and we can prepare your tour according to your wishes.