From the top of Montmartre to the Tuileries with Ai

7:02 AM –  On early Thursday morning, with Ai, who lives in Seattle (USA), we decided to begin our tour with a sports ascent towards the “butte Montmartre”. Ai generally runs on hilly roads in the region of Seattle. In Paris, the running routes are relatively flat, except for some rare exceptions, as Montmartre.

The continuation was easier. At first, the descent led us towards the Elysée Palace, the French Republic president’s residence, then, on the way back, we admired some of the numerous sculptures which decorate Paris, among which the General Lafayette’s statue and his small curiosity, a tortoise who accompanies the steps of his horse…

By continuing our road, we crossed the garden of the Tuileries which abounds in works of art. New creations appear there from time to time, on the occasion of exhibitions temporary like the FIAC which is held from 20th till 23th October in various places of Paris.

We were entitled to some previews, of which “Earthlings” of the artist Adrian Villar Rojas, “fallen column” which provokes a funny effect when we meet it for the first time.

It does not however seem to disturb the sons of Caïn, Paul Landowski’s work, which stands a little farther. 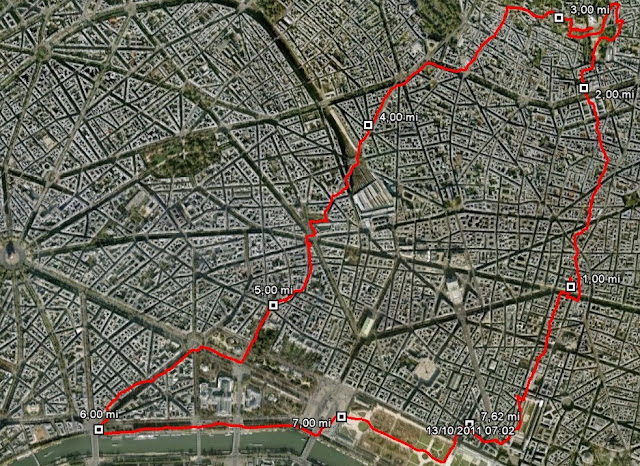 Modern art in Paris with Ginger and Ryan
⟨ ⟩
By reading our blog, discover examples of routes we follow with our visitors. See the photos which illustrate the places we met. As during the running tours, we enjoy to present you the stories and the anecdotes of the encountered places. Find the route at the end of articles. If you look for information about a particular place, use the Places list or the Search bar below. If these articles inspire you, contact us and we can prepare your tour according to your wishes.