Two mornings in the discovery of Paris with Jason

8:50 AM – Friday and Saturday – Jason, who lives in Brooklyn (NY – USA), chose to discover Paris by running two following mornings.

The first day, we explored the island of La Cité, the Louvre, the Palais-Royal, the place Vendôme, the place de la Concorde to return along the Seine. We finished our running in the Arenas of Lutetia; gladiators fought there when Paris was a part of the Roman Empire.

The next day, we ran Left bank, crossed by the Pantheon, the garden of the Luxembourg, crossed the residence of the Prime Minister: Matignon, admired the Rodin museum since the street, and joined then the Invalides and the Eiffel Tower then returned by the boulevard Saint Germain.

Our route brought us to cross the limits of Paris in the Middle Ages, the Louvre which was a fort intended to protect the western edge of the city and the surrounding wall of king Philippe Auguste some vestiges of which there are still in the current Paris, as the wall that we can see street Clovis (5th arrondissement):

In the 12th century, Paris represented a small portion of the present Paris, surrounded by Philippe Auguste’s wall (in yellow on the image) and protected by the Louvre, a fort in the time (in blue):

By getting closer, we can see some places where we can find the old and still visible wall nowadays: 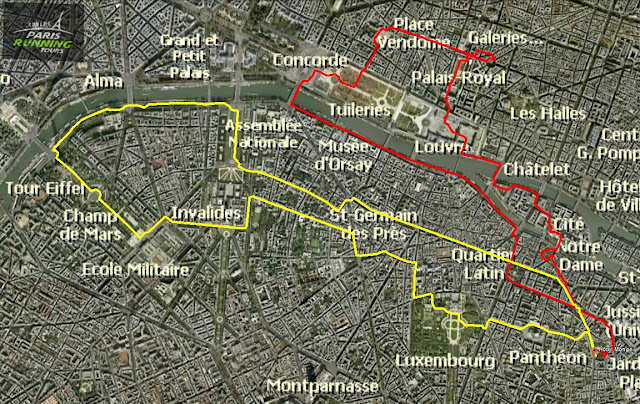 A big Running Tour of 18 miles (29 km) with Alina, one thousand discoveries in Paris!