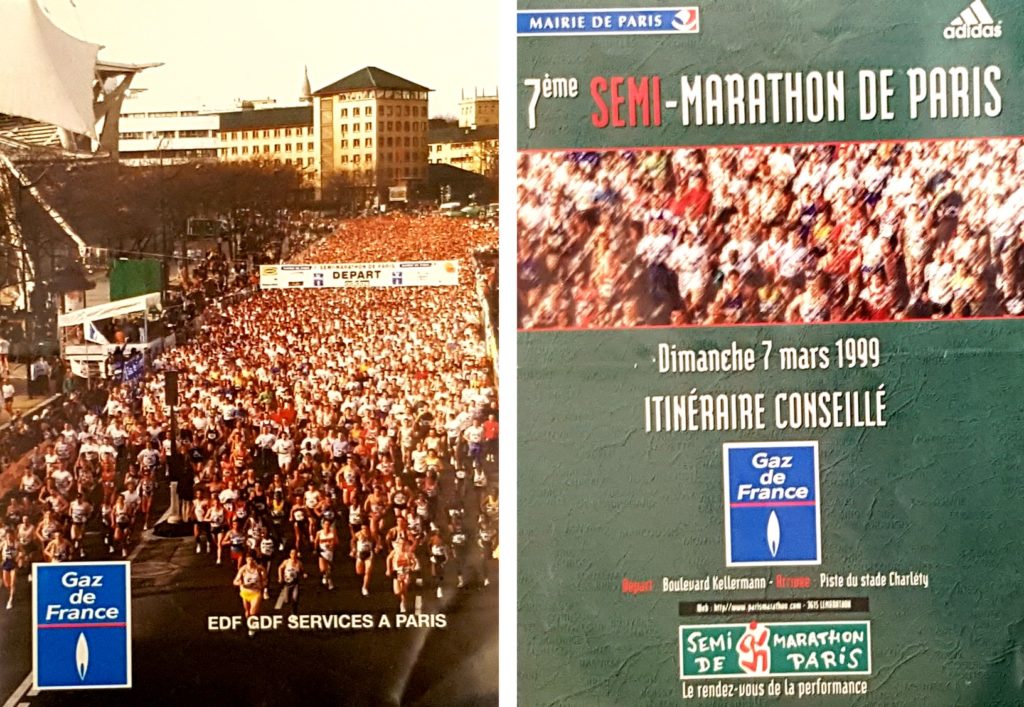 Start of the Paris half marathon 1999 – On the left is the Charlety stadium. The finish is inside, on the track!

In 1999, the start and finish are still at Charlety Stadium. The route is similar to the one of 1998, i. e. a route that passes through the 13th arrondissement of Paris and the Bois de Vincennes.

The arrival of the first timing chip!

GREAT NOVELTY! For the first time, in Paris, we are given an electronic chip that will measure our time of passage and arrival in a precise way. Previously, we had to give our bib on arrival, the order of arrival allowing to measure the place and time…
This chip is attached to the shoe by a lacing system. The chips are collected on arrival by an “army” of volunteers (thank you!). Unfortunately, sometimes the organisation did not calculate enough space after arrival to allow this collection! Which, during a half-marathon in Paris, caused the participants who run around 2 hours to be blocked, forced to queue before the finish line!

Since then, and this has become widespread since the mid-2010, the chip is integrated into the bib in the form of a small ribbon. No need to return the chip on arrival or attach the chip to the shoe (with the risk of losing it if the lacing is done a little quickly).

Even if Minitel is still in use, the results will gradually be available on the Web (it was called Web rather than Internet at the time).

The results of this half marathon in 1999 include some well-known names at the time (Dallenbach, Renders, our Michel Orchilles national who did an excellent time in VH2, 1h14!).

In 1999 and for some time to come, diplomas are still sent by post (and not delivered in PDF as they are now)

Half marathon of Paris 1999 diploma

← ← 1998 Paris Marathon 1999 → →
What a pleasure to run on the Parisian pavement free of cars, to be able to run in the middle of the "Avenue de l'Opéra", in front of the Eiffel Tower or in the middle of the "Champs Elysées"... Parisian passionate about my city and running (hence Paris Running Tours!), I have been running races since 1995, most of them in Paris. This blog aims to present you past and future Parisian races. Discover the calendar and detailed articles of running competitions in Paris. For each race, links will take you to the sites related to the race (registrations, results, practical information...), photos, videos, routes... On some photos, you can recognize our Paris Running Tours runners : ). Thanks to the photographers! I hope to see you at one of these races (please let me know) or during a Paris Running tour. Happy running in Paris! Jean-Charles, Paris Running Tours guide and manager