By way of the bridge of “l’Archevêché” with Ellen

7:58 AM – Ellen, from Antwerp (Belgium), runs regularly very early in the morning. On Saturday, we ran a little later to take advantage of the light which offered us the sun of December.

Our road led us on the bridge of  “l’Archevêché” which is on the East point of the island of “La Cité”, behind Notre-Dame. As on the Pont des Arts, situated in front of the West point of the island, the padlocks prosper in abundance. Padlocks?
Yes, indeed! Padlocks of love! As formerly on trees, the lovers register their both names on a padlock, hang on it to one of the most beautiful places of Paris and throw the key in the river Seine…

This fashion would have begun in the 80s in Eastern Europe and appeared on the “Pont des Arts” in 2008 (see the photos of the “Pont des Arts” in this blog).
Sometimes, all the padlocks disappear at one go without that we know why, the services of the city of Paris being not at all responsible for these disappearances. Thieves of metals? Padlocks quickly return however. Even the “bouquinistes” (secondhand booksellers along the Seine) adapted themselves and sell, besides the usual books, padlocks!

A little earlier on our route, Montaigne:

In front of the university of “La Sorbonne”, is the statue of Montaigne, philosopher and writer of the Renaissance. Originally, it was a white marble statue, created in 1933 by Paul Landowski and offered to Paris in 1934. The stony sculpture was so manhandled by the students and vandalized that it was replaced in 1989 by a more resistant, bronze version.
Its right foot would give luck. By touching it, the pronounced wish would come true.
In marble, the foot, highly sought, was numerous times broken. In bronze, it resists but loses its patina and becomes golden! 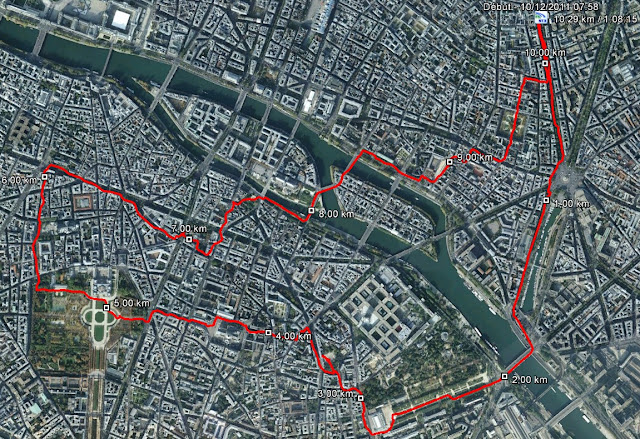 With Laura, meeting Geneviève, Patroness of Paris and model of resistance
⟨ ⟩
By reading our blog, discover examples of routes we follow with our visitors. See the photos which illustrate the places we met. As during the running tours, we enjoy to present you the stories and the anecdotes of the encountered places. Find the route at the end of articles. If you look for information about a particular place, use the Places list or the Search bar below. If these articles inspire you, contact us and we can prepare your tour according to your wishes.