Near a man of the “Enlightment” with Elisa

9:09 AM – Elisa, from Atlanta (USA), takes back the running having ended the New-York Marathon. On this Sunday of December, we chose a tour along the river Seine. On our road, we crossed Thomas Jefferson, a great friend of France, who liked Paris very much. He was in the same way as his French counterparts, a man of the “Enlightment” and succeeded Benjamin Franklin as Ambassador of United States in France.

Thomas Jefferson enjoyed a lot the Architecture. Thomas Jefferson’s statue is, besides, situated just next to a building which he admired very much, the hotel of Salm, otherwise known under the name of the Legion of Honor Palace. This palace was often imitated. You can see, for example, a copy in the Lincoln Park, in San Francisco (USA).

If you look closely at the photo with Elisa, quite at the bottom, you will see the “Sacré Coeur”, the very visible church because at the top of Montmartre, in the North of Paris.

By running along the river, we may be under the impression to go straight on. By going East by the left bank (for example), at the level of the Bir Hakeim bridge, we can be surprised seeing the “Sacré Coeur” in front of us, while at the another moment, next to Thomas Jefferson for example, we will see it on our left. In Paris, the river Seine is a curve!

A little later, we joined the square of Notre-Dame. Have you already noticed on the ground, the point Zero of the roads of France?

Yes, indeed, Paris is a big city and it is necessary to have a precise point in Paris which serves as reference for the distances with the other cities.
What is the distance between Versailles and Paris by road, for example? Not the one who meets a limit of Paris but the one who finishes in the point Zero:


What about you? Where is the “point zero” of your city?
Merci Elisa ! 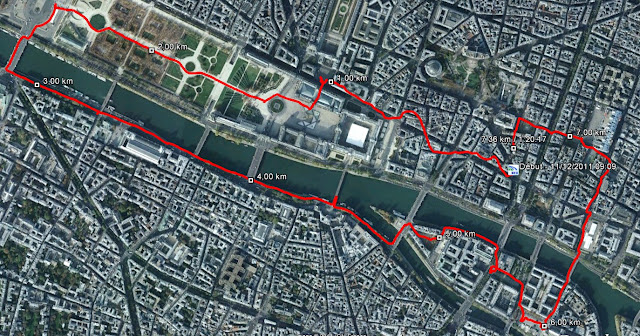