In front of the French Senate with Daniel and Wils

9:06 AM – With Daniel and Wils of New York (USA), we ran largely on the left bank: the garden of plants, the arena of Lutecia, the Pantheon, street Saint Jacques…

On our road, having gone down the Mountain Sainte Geneviève, we crossed the garden of the Luxembourg and met the Senate. The Senate with the National Assembly are the two chambers which represent the French legislative power.
The French Senate is also called Palace of the Luxembourg, place where sit the senators since the revolution. This palace was ordered in 1615 by the regent Marie de Medici, the widow of king Henri IV and mother of Louis XIII.

On our route, we noticed on the ground curious medallions:

These medallions, among 135, were put in Paris in 1994, on the line of the meridian of Paris (today, we use the meridian of Greenwich). They indicate the North-south virtual line of the meridian with letters “N” and “S”.
The Dutch artist Jan Dibbets so realized the tribute to François Arago (1786-1853), scientist and French politician.
The meridian of Paris was established to allow the creation of the Astronomical Observatory of Paris created in 1667 (Arago was in particular the director of the Paris Observatory).
Moreover, by running in the garden of the Luxembourg, near the Senate, Daniel pointed out to us the Observatory far off by looking at the South of the garden.

How many “points Arago” will you find going through Paris? Follow the meridian! 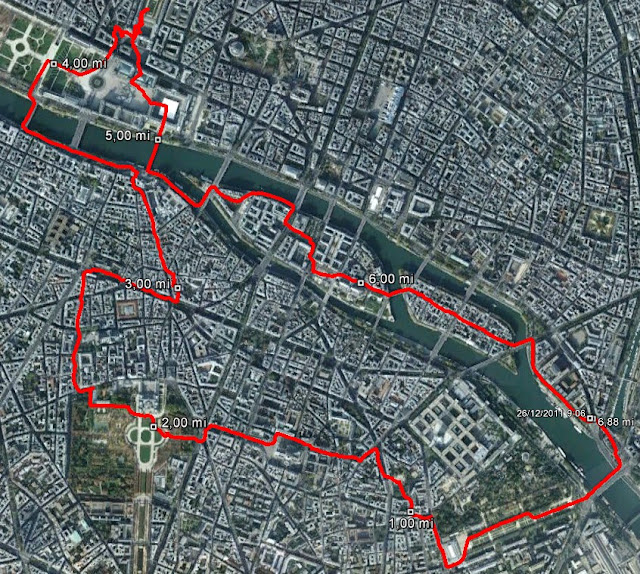