Along the Seine with Angela

7:32 AM – With Angela of Santiago (Chile), we ran early during this beautiful morning of May. At that time, streets are still quiet, with very few pedestrians, deserted quays and the tourist places still little frequented. We had the city only for us. The morning, Paris belongs to the runners!
If you run the morning on the quays bordering the Seine, you will see surely large green boxes (as on the photo above).
They are the boxes of secondhand booksellers, called the “bouquinistes” (here a video – in French). You will see them opening from 11 am.The “bouquinistes” of Paris sell old books, secondhand or contemporaries but also of the exhausted editions, prints and etchings.

From the XVIth century, on the quays of Paris, we could meet small peddlers of books ; from 1620, twenty four approved secondhand booksellers. For a royalty, they are entitled to hold portable shops on the bridge and the neighboring quays. In 1859, the itinerant secondhand booksellers became concessionary of the city of Paris which enabled them to pose boxes at fixed place on the parapets.
The Seine is the only river which runs between rows of books (more than 300 000)!
Merci Angela! 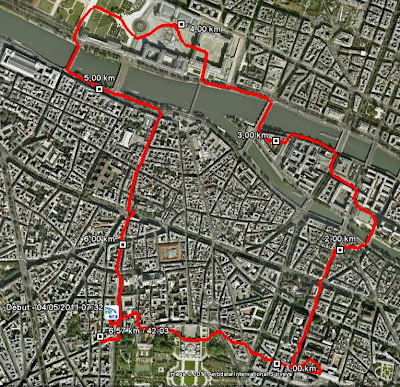 Running in the Champs-Elysées with Françoise and Benoît

Left bank, at the level of the ancient city with James
⟨ ⟩
By reading our blog, discover examples of routes we follow with our visitors. See the photos which illustrate the places we met. As during the running tours, we enjoy to present you the stories and the anecdotes of the encountered places. Find the route at the end of articles. If you look for information about a particular place, use the Places list or the Search bar below. If these articles inspire you, contact us and we can prepare your tour according to your wishes.