Under the Arc du Carousel with Kristy

8:01 AM – Kristy, from Atlanta (USA), one week after running the half-marathon of Georgia, and having fully recover from the race, chose to do a sporting visit of Paris with Paris Running Tour. We explored “l’Ile de la Cité”, the right bank going through “le Louvre”, “les Tuileries” and the “Champs Elysées”, then we rejoined the left bank to run under the arches of the Eiffel tower, we crossed “les Invalides” and went along the river Seine to finish in the Quartier Latin.
During the visit, as the armies of Napoléon, we “triumphantly” went through the “Arc du Carousel”!
Merci Kristy*!
The “Arc du Carousel”:
After his victory in Austerlitz, Napoléon declared to his troops : “I will bring you back to France. You will pass through arches of triumph on your way to your homes!”. Therefore were constructed the “Arc du Carousel” at the Tuileries and the majestic Arc de Triomphe at place de l’Etoile.
130 years before, Louis XIV ordered the construction of the Arcs of “la Porte Saint-Martin” and of “la Porte Saint-Denis” in the North of Paris.

On this picture, in the background, behind the Arc du Carousel, we can see the “Palais des Tuileries”, which closed the Louvre by the west side. The palace was burnt during the events of “La Commune” in 1871.

* See Kristy’s blog about running and healthy food, a good choice for life!


The route of the tour: 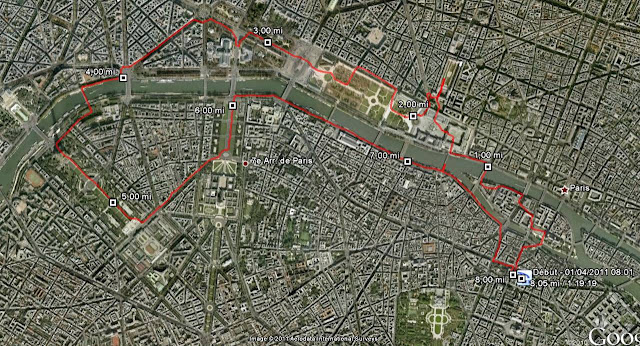