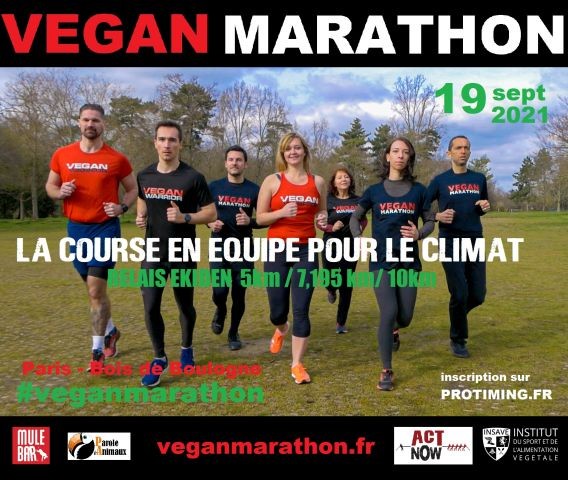 First edition of the Vegan Marathon

First edition of the Vegan Marathon in Paris which takes place at the end of the summer in the beautiful Bois de Boulogne.
This marathon is a relay race in teams of 6, an Ekiden.
It is organized by the Institute of Sport and Vegetal Food (INSAVE)

This competition is open to everyone. You don’t have to be vegan to participate. The objective is to demonstrate the positive effects of plant-based food in sports and its benefits for the Planet. The Institute of Sport and Vegetable Food is a Non Governmental Organization, created in 1995 by Magà Ettori and present on all continents.
A real laboratory of ideas, the objective of INSAVE is to raise awareness of the respect for humans, the environment and animals, based on the positive values of sport and culture.

The start and finish will be in the Bois de Boulogne, Route de Boulogne à Passy 75016 Paris. The race will consist of a 2500 m loop to be completed twice for the first, third and fifth relays, four times for the second and fourth relays, twice accompanied by a 2195m loop for the sixth relay. For health reasons, in 2021 the participation in VEGAN MARATHON is limited to 33 teams.

Each runner will be given a race T-shirt at the time of registration (the choice of size is made during the online registration). The T-shirt must be worn during the race. The bibs will be collected by a team member on Saturday September 18th at the VEGAN MARATHON booth at the Smmmile Pop Vegan Festival. 6 places per team will be offered by the Festival to collect your bib.

← ← La Parisienne 2021 10 km Adidas Paris 2021 → →
What a pleasure to run on the Parisian pavement free of cars, to be able to run in the middle of the "Avenue de l'Opéra", in front of the Eiffel Tower or in the middle of the "Champs Elysées"... Parisian passionate about my city and running (hence Paris Running Tours!), I have been running races since 1995, most of them in Paris. This blog aims to present you past and future Parisian races. Discover the calendar and detailed articles of running competitions in Paris. For each race, links will take you to the sites related to the race (registrations, results, practical information...), photos, videos, routes... On some photos, you can recognize our Paris Running Tours runners : ). Thanks to the photographers! I hope to see you at one of these races (please let me know) or during a Paris Running tour. Happy running in Paris! Jean-Charles, Paris Running Tours guide and manager