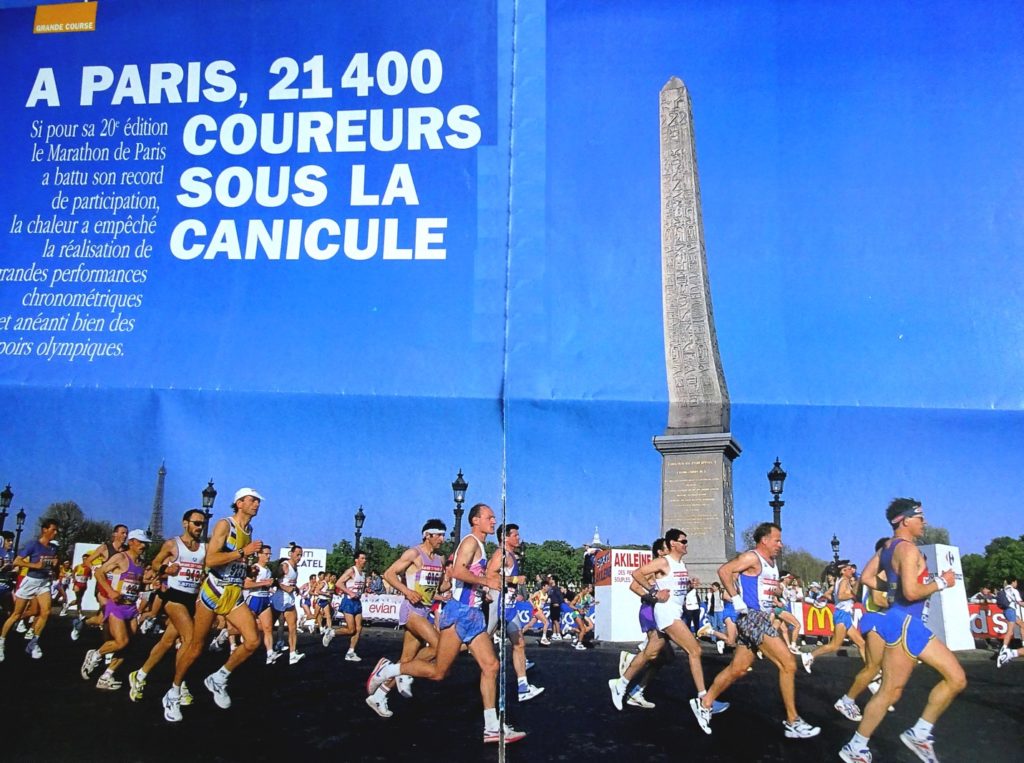 Passage of the Paris Marathon 1996 at “Place de la Concorde” 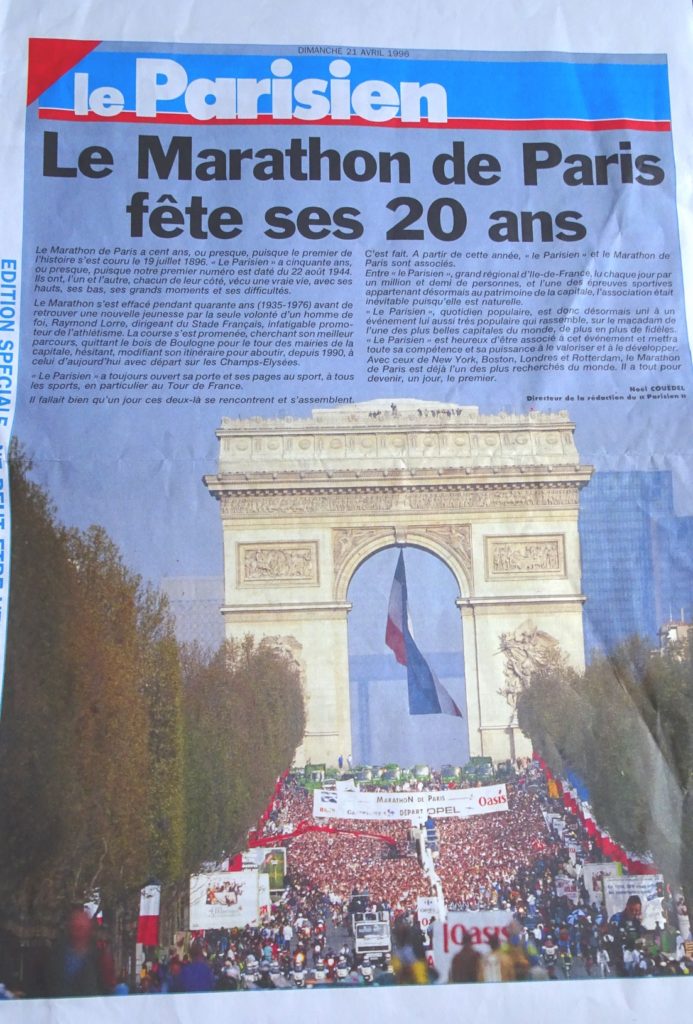 The 20th anniversary of the Paris Marathon

At the time the Paris marathon was called the “Marathon of Paris”, it was not preceded by the name of the official sponsor as it is now. It was held at the end of April and not at the beginning of the month. Likely to be hotter, this was the case in 1996.
The departure was at 9:00 AM (instead of 8:45 AM to meet the requirements of television broadcasting – departure in 2018: 8:20 AM).
The route was not very different from 2018 (see the link above).
There was very little use of the Internet, we didn’t register online but by mail and bank cheque. If you did not have an athletics licence, the medical certificate could not be a simple copy, it had to be a certified copy, therefore we had to make several copies and go to the town hall to have them certified with an official stamp.
No electronic chip, passages at the finishing line were taken into account by volunteers or other means (for some races, the bibs were picked up and collected according to the finish, sometimes with small spikes to group them together). No real time therefore, only official times, recorded when crossing the finish line whatever the time you started.
The results were only available in newspapers delivered the next day or later…

All information in a small booklet

Finally, what mattered to me was finishing the marathon, which I did but with one small disappointment: having walked during the marathon. In fact, inexperienced, I had taken dried fruits that gave me some nausea and forced me to walk… in short, one of my first lessons: to test in training what you intend to absorb during the marathon….

I finished in 3h54, it didn’t mean anything to me at the time, I wanted to run a marathon without stopping… doing less than 4h or less than 3h didn’t mean much to me, but well, pretty quickly, I wanted to start again and the hourly milestones started to really matter…

Heavy shoes to make a marathon (the fashion of the time: air bubbles in them!)

← ← TIPS 1996 → →
What a pleasure to run on the Parisian pavement free of cars, to be able to run in the middle of the "Avenue de l'Opéra", in front of the Eiffel Tower or in the middle of the "Champs Elysées"... Parisian passionate about my city and running (hence Paris Running Tours!), I have been running races since 1995, most of them in Paris. This blog aims to present you past and future Parisian races. Discover the calendar and detailed articles of running competitions in Paris. For each race, links will take you to the sites related to the race (registrations, results, practical information...), photos, videos, routes... On some photos, you can recognize our Paris Running Tours runners : ). Thanks to the photographers! I hope to see you at one of these races (please let me know) or during a Paris Running tour. Happy running in Paris! Jean-Charles, Paris Running Tours guide and manager