The 10 km of the Hexagone*: a simultaneous start on Sunday 24 June at 10am in several French cities in a gigantic competition!
A part of the registration is donated to the National Union of Traumatised Brains (Union Nationale des Traumatisés Crâniens et Cérébro-Lésés). This donation will help improve the lives of the injured and their families.

In Paris, the race starts and ends at the splendid hippodrome of Auteuil, precisely on the athletic track which is in the middle of the horses race field (for information, it is a track open to the public when there are no equestrian races, a beautiful 400 m to make its intervals series).
It’s always a great pleasure to finish a race by going around a stadium! Propice to the final sprint which makes us gain a few seconds and pass under the threshold of the objective!

* “Hexagone” means the continental part of France, reminding that its geographical shape resembles an almost regular hexagon (3 land sides and 3 sea sides). By extension, “Hexagone” is often used to designate France itself. 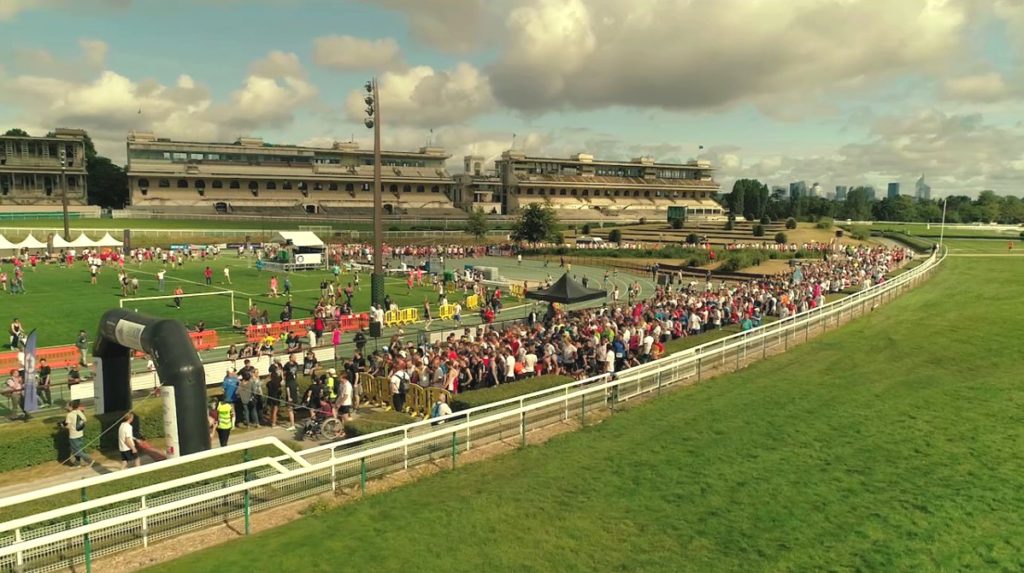 Start and finish at the Auteuil racecourse stadium

← ← The strides of the 12th arrondissement 2018 Garmin Triathlon of Paris 2018 → →
What a pleasure to run on the Parisian pavement free of cars, to be able to run in the middle of the "Avenue de l'Opéra", in front of the Eiffel Tower or in the middle of the "Champs Elysées"... Parisian passionate about my city and running (hence Paris Running Tours!), I have been running races since 1995, most of them in Paris. This blog aims to present you past and future Parisian races. Discover the calendar and detailed articles of running competitions in Paris. For each race, links will take you to the sites related to the race (registrations, results, practical information...), photos, videos, routes... On some photos, you can recognize our Paris Running Tours runners : ). Thanks to the photographers! I hope to see you at one of these races (please let me know) or during a Paris Running tour. Happy running in Paris! Jean-Charles, Paris Running Tours guide and manager