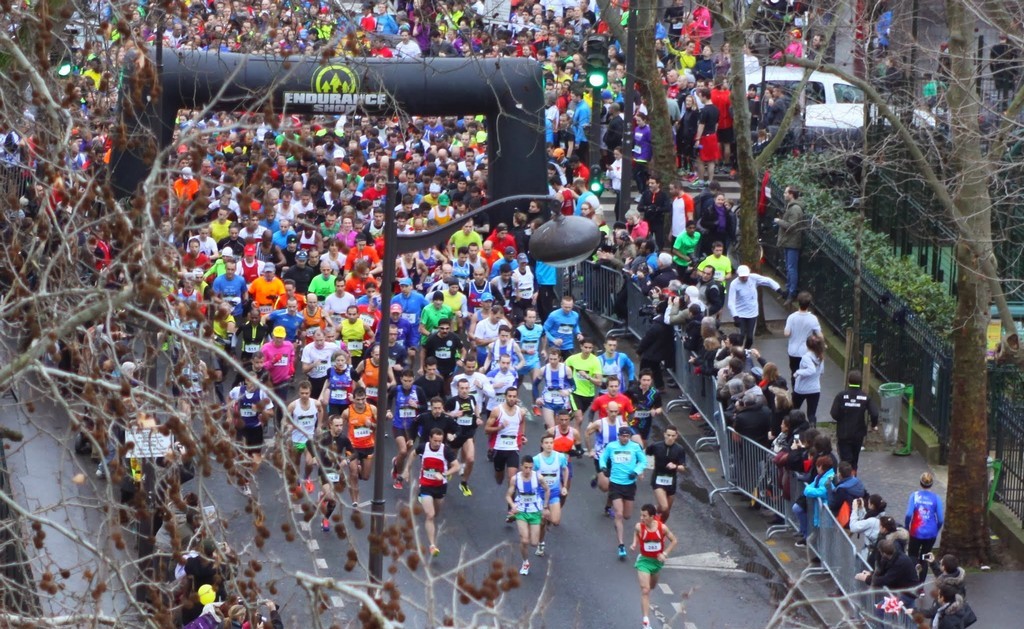 The rain was not very bad, contrary to forecasts. The first man finishes in 30:59, the first woman in 36:33. Find the results here.
Nice medal at the finish line, imitating a Paris subway ticket: 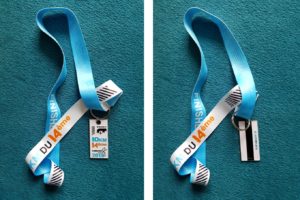 Relive the race with the Relive tour here.

The official photos of all the moments of the race (many) : here and 4 vidéos: here (thanks to the organizer!).

First competition of the year which finds the runners impatient to rerun after the holidays. A flat circuit convenient to the performance… The first “arrondissement” 10K.
Different City Halls or local clubs participate in the organisation of a 10K in their Parisian “arrondissement”* (some of these races don’t exist anymore or are not planned in 2018, because of growing difficulties to organize or finance the races in Paris…):

The race is organised by “l’Office du Mouvement Sportif” (OMS14), hosted by the City Hall of the 14th “arrondissement”. The OMS14 gathers the majority of the sports associations of the 14th arrondissement of Paris.

As every year, the start will take place in front of the City Hall. Three waves are planned this year. You can get a bib for a place in the preferential corral if you do less than 50 minutes per 10 km for women, less than 40 for men. All you have to do is to write to 10km14oms@gmail.com and send a proof of time or bring it with you when fetching your bib.

Not far from Montparnasse and the avenue du Maine, the course is composed of two 5K loops that start and return to the Town Hall. The course is relatively flat, even if a small uphill false plate is on our thighs when we return to the town hall…
The public is not very numerous – it’s cold in January – except at the 5th km and at the finish.
Be careful, the last loop does not end exactly where the first one ends, arrived at the level of the town hall, it is necessary to plan two more turns to the left to go along the square and finish, if possible, in sprint on about fifty meters!
Medals at the finish, refreshment with soup in general and a small bag with some goodies…

Find the registration form, practical information and the route here: Bulletin-plan-et-règlement2018
Registration can of course be done online at TopChrono

So, see you soon, to discover the streets of the 14th arrondissement of Paris.

* An “arrondissement” is a municipal subdivision of the commune, used in large cities like Paris, Lyon, and Marseille. They are 20 in Paris with a City Hall (“Mairie”) and its own mayor (“maire”) in each one. There is also a City Hall for the whole Paris, and one mayor for Paris (“La Mairie de Paris” or “L’Hôtel de Ville”).

← ← Running races in Paris – The blog Valentine’s Day race 2018 → →
What a pleasure to run on the Parisian pavement free of cars, to be able to run in the middle of the "Avenue de l'Opéra", in front of the Eiffel Tower or in the middle of the "Champs Elysées"... Parisian passionate about my city and running (hence Paris Running Tours!), I have been running races since 1995, most of them in Paris. This blog aims to present you past and future Parisian races. Discover the calendar and detailed articles of running competitions in Paris. For each race, links will take you to the sites related to the race (registrations, results, practical information...), photos, videos, routes... On some photos, you can recognize our Paris Running Tours runners : ). Thanks to the photographers! I hope to see you at one of these races (please let me know) or during a Paris Running tour. Happy running in Paris! Jean-Charles, Paris Running Tours guide and manager