From the Latin Quarter to the Eiffel Tower with Peter

10:09 AM – Peter, who lives in Arhus, Denmark, prepares his next marathon, which will take place in April (Rotterdam or Hamburg). The training of Peter began well, notably by a long Running Tour in Barcelona with our friends of Barcelona Running Tour, a 21 km tour (~13 mi).
On this Friday, February 15th, two days later, it is with a running done at a good pace that we did 19 km. We combined “the useful and the pleasant” by evoking the history and the cultural places of Paris.
As we can see above, we did a small break “place de l’Alma” (located just after the 28th km of the marathon of Paris 😉 ) with in the continuation of the avenue Montaigne, the Sacred Heart which dominates Paris since the Mound Montmartre.

A little later, having “climbed” the small hill of Chaillot, a nice tourist suggested photographing us since the esplanade of the Trocadéro:


By enlarging the photo, you can see Galatée and Acis the shepherd, threatened by the Cyclops Polyphème. It is Marie de Medici, the widow of king Henri IV, who made build this fountain in 1630, in memory of the Florentine gardens of her childhood.

Not far from the garden of the Luxembourg, since the street of the Val de Grâce, appears the church of the same name:


Another queen, Anne of Austria, made build the Church of the “Val de Grâce”. The building was ended in 1667 (one of the highest domes in the period). Wife of Louis XIII, she made the wish to realize this church at the birth of her future child, birth which arrived 23 years after its marriage! This first son, Louis XIV, the famous “Sun King”, put the first stone of the building at the age of 7.

Merci Peter, have a good marathon! 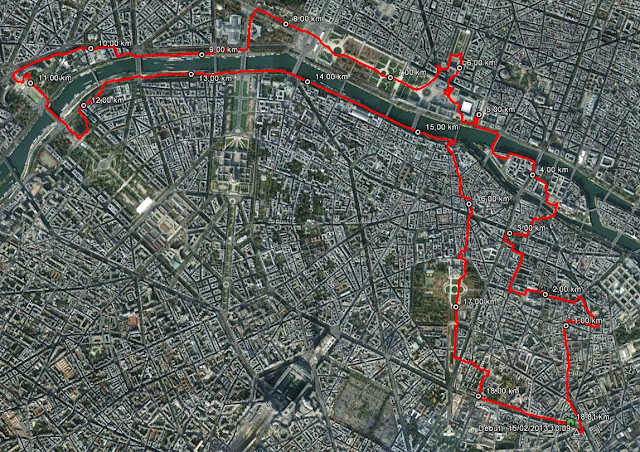 A new Running Tour in Paris with Manoella

A long sunny tour with Colin

Climbing to the Butte Montmartre to see the view from the Sacré Coeur early in the morning
⟨ ⟩
By reading our blog, discover examples of routes we follow with our visitors. See the photos which illustrate the places we met. As during the running tours, we enjoy to present you the stories and the anecdotes of the encountered places. Find the route at the end of articles. If you look for information about a particular place, use the Places list or the Search bar below. If these articles inspire you, contact us and we can prepare your tour according to your wishes.