By running in the parks of Paris with Scott and Kelly

8:59 AM – Kelly and Scott live in New York (USA) and usually run in the magnificent park of Central Park. Today, we discovered some of the superb parks of the center of Paris, the Luxembourg gardens, Tuileries gardens and the Palais Royal gardens.

The name of “Luxembourg” for the gardens and the Palace (the current Senate) comes from the Duke of Luxembourg, François de Piney who possessed a hotel in this place, in the 16th century. Marie of Medici, the Regent of France, acquired the hotel and built the current Palace in 1615.
Did you notice in the background of the above photo, a small dome far off? It is the Paris Observatory, the oldest observatory of the world still in function. It was created in 1667 by king Louis XIV.

With the American “Center for Astrophysics”, it is the most important research center in astrophysics and in astronomy of the world.
Very soon, the Observatory will open again its doors to the Public, from Thursday, 11 till Sunday, October 14th, 2012 on the occasion of the “fête de la Science“.

Of the three parks, which is the most beautiful one? The Garden of the Luxembourg, the discreet Garden of the Palais Royal, or the Garden of the Tuileries, placed on the historic axis of Paris?
Impossible to say, they are splendid all three!

Let us find the Garden of the Tuileries, a good place to run:

On our road, when we discovered a part of Philippe Auguste’s outer wall, a nice runner proposed to take a picture of us:

Thanks to him. A good souvenir! 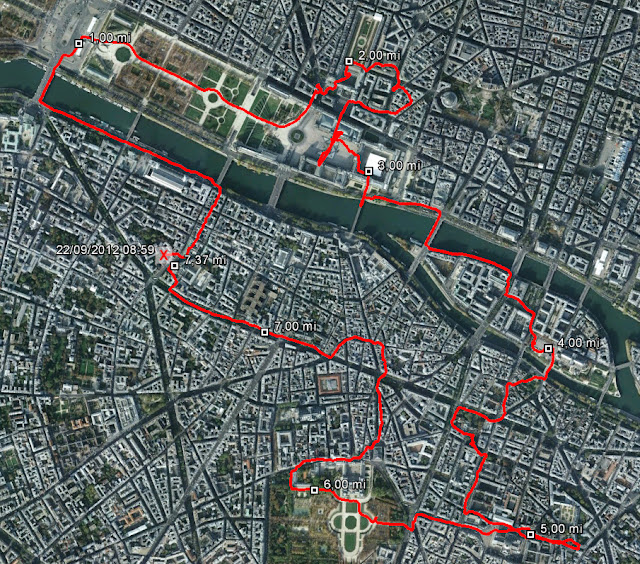 The oldest monument of Paris with Laura, Marni, Peter, Marshall and Jason