6:30 AM – Sarah of Houston (USA), wished to discover Paris by running four following mornings with Paris Running Tour. It is thus with a big enthusiasm that we investigated the center of Paris as well right bank as left bank (see routes at the end of the post).

Did you know that the metric system was set up during the Revolution?

The National Convention (constitutional and legislative revolutionary assembly), to generalize the use of the metric system disposed sixteen marble standard meters at the most frequented places of Paris.
These meters were installed between February, 1796 and December, 1797. With Sarah, during our explorations, we found both last ones which remain at present in Paris, the one of the right photo being the only one still on its original site:

On the “grands boulevards”, we discovered two triumphal arches:

Yes, before the Arcs of Triumph wanted by Napoleon the 1st, place de l’Etoile and in the Carrousel of the Louvre, Louis XIV ordered the construction of these two Arcs in honor of his military victories (See the inscription at the top of the Arcs: “Ludovico Magno”, Louis the Great). Louis XIV, Sun King did not only make Versailles!

The Arc of “La Porte Saint Denis” (“Porte”=door) and the Arc of “La Porte Saint-Martin” are in the location of former fortified doors of Paris, both belonging to the surrounding wall of king Charles V.
Indeed, the “Grand boulevards” which we know now correspond to the ancient surrounding fortifications of Paris, built by Charles V, widened by Louis XIII, then destroyed under Louis XIV
The word “Boulevard” comes moreover from the word “Bolevers” which comes itself from the ancient Dutch word “Bolewerk” meaning “Ramparts”.

See these trees planted all along the Boulevard. The Parisians called them “boules vertes” (Green balls). Boules vertes = Boulevards! Other origin of the word!

Among our other historic explorations, we found the ancient Arenas of Lutetia (Lutetia = Paris before the third century later JC). They were accidentally discovered by chance during works in 1870. These Roman arenas could contain more than 10000 spectators. Under their eyes took place gladiators’ fights, fights of wildcats but also representations of comedies or dramas.

Nowadays, it is a quiet place for games of balls or tournaments of petanque. From time to time, theater companies play there.

The routes of the four tours: 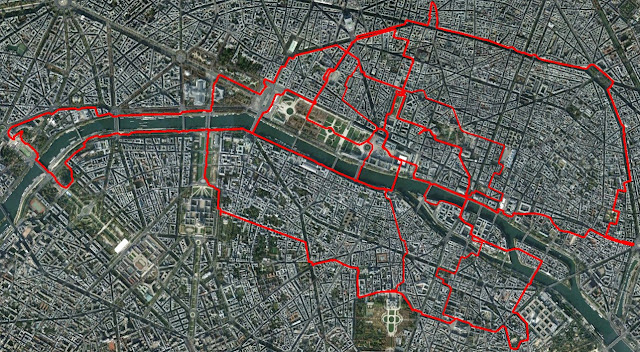