The Parisian running competitions in 2013 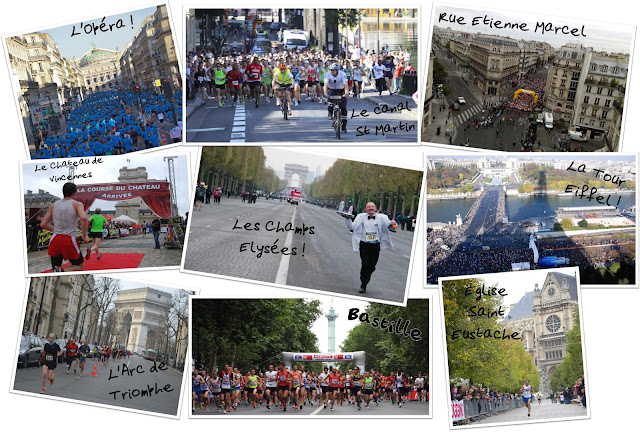 Click on the picture for a larger view
It is always a great pleasure to run on the Parisian roadway freed of cars, to be able to run on the avenue of the Opera or at the foot of the Eiffel Tower, to go down the Champs Elysées running the first kilometer of the marathon…
As every year now, we propose the 2013 list of the Parisian competitions, all those who take place in Paris.
Some explanations:
. For each competition of the list, you will find icons on which you can click to obtain either links on sites relative to the race, or the photos, or the movies or route of the race. Photos and movies date 2012 or previous years (on certain photos, you can recognize our Paris Running Tour runners). Thanks to the photographers and the film-makers!
. Some of the routes result from our GPS watches (less precise in the less wide streets).
. 10 km=6.376 mi, half-marathon 21.1 km=13.195 mi, marathon 42.195 km=26.2 mi
Here are samples of the icons on which you can click to see photos, movies, routes, web sites…

Icon to go on the site of the race’s organizer

Icon to go on the Top Chrono site to register on the race or see the results, etc.

Icon to see photos of the race

Icon to see a movie of the race

Icon to see a representation of the route of the race (drawn or GPS track)
Do not hesitate to click!

. Besides, “prt” means that the competition is a part of the Paris 10 km challenge, challenge in which we participate (the Paris Running Tour challenge which carries the same name as our sightjogging company!).

We wish you a very happy New Year and many beautiful competitions!

Sunday 27/1/13 – 9:30 AM – “Les Foulées du 8è” – 10 km prt
A little hilly race in the beautiful district of the 8th arrondissement with a start “Church” Saint-Augustin, passage in front of the Parc Monceau, strides avenue of Friedland with the Arc de Triomphe in sights and an arrival to the feet of Joan of Arc! Nearly 1400 finishers in 2012.
(“Les Foulées du 8è” means “the Strides of the 8th arrondissement”)

Saturday 16/2/13 – 10:30 AM – La Course de la Saint Valentin – 10 km prt
5 buckles of the beautiful and hilly park of the Buttes Chaumont (Buttes means mounds!), down hill, up hill, down hill, up hill, 5 times! Very good atmosphere for this race organized by the Paris Front Runners. Diversity, tolerance and heat, in spite of the cold of February! 281 finishers in 2012.
(“La Course de la Saint Valentin” means the race of the Valentine Day)

Saturday 9/3/13 – 2:30 PM – Foulées du Tertre – 10 km prt
A folk and “mountainous” race on the mound Montmartre. Route passing in front of the Sacred Heart and the “place du Tertre”, and through the sloping streets of the “commune” of Montmartre. All this in the middle of the afternoon and tourists! 561 finishers in 2012.

Sunday 7/4/13 – 8:45 AM – Paris Marathon – 42.195 km (26.2 mi)
The MARATHON OF PARIS! The event of the year for many runners. A beautiful visit of the capital! Go down the “Champs Elysées” (Careful, not too fast, it is only the beginning), cross the “place de la Concorde”, go along street of Rivoli and pass in front of the “Palais Royal” and the Louvre, greet the Genius of the Bastille, join the Castle and the Wood of Vincennes, return and join the West by way of the river Seine banks and admire the Conciergerie, then the Eiffel Tower, join Roland Garros’ courts, discover the very green Wood of Boulogne and cross the finishing line on the avenue Foch with the Arc de Triomphe in front of you! Phew! What a beautiful stroll! 32 980 finishers in 2012. Bibs for 2013 = 46,000 !

Sunday 19/5/13 – 10:30 AM – “Courir Ensemble” (Running together) – Handicap International – 10 km prt
Everything is in the title: “Run together”, valid and disabled. A very good atmosphere. Event organized by Handicap International. Among the numerous proposed races, a flat 10K, again in the Wood of Boulogne, magnificent in May! 1512 finishers for the 10K.

Sunday 9/6/13 – 10:00 AM – La Course du Château (The Castle race) – 10 km prt
In June and in July, it is, this time, in the other Wood of Paris that take place the competitions: the race of the Castle, the “foulées du 12ème” as well as the “Foulées France des Iles” take place in the very beautiful Wood of Vincennes.
The “Course du Château” starts and returns to the magnificent Castle of Vincennes, with arrival in the Castle on a red carpet! Route flat and convenient to the performance. 3478 finishers in 2012.

Sunday 23/6/13 – 10:00 AM – Les 10 km de l’Equipe – 10 km
Race organized by ASO who also manages half marathon and marathon of Paris. Under the banner of the sports newspaper “L’Equipe”. Route running in the beautiful places, the avenues and the boulevards of the east of Paris. 7979 finishers in 2012.

Sunday 6/10/13 – 10:00 AM – 10km Paris Centre Nike – 10 km prt
Magnificent race in particular for the places which it crosses. Start avenue of the Opera, with the beautiful Garnier Opera in front of the Start, crossing street of Rivoli, in front of the Bourse (former stock exchange building), Place Vendôme and the arrival, Palais Royal place in front of the Louvre. Flat route. 4259 finishers in 2012.

Sunday 13/10/13 – 10:00 AM – Les 20 km de Paris – 20 km
Another big international race. Start on the bridge of Iéna in front of the Eiffel Tower, to begin: a small ascent to the Trocadéro, after, running in the Wood of Boulogne and then the right bank of the Seine up to the “Pont Royal” (Royal bridge) and return left bank to the finish at the Eiffel Tower. 22 792 finishers in 2012

Besides the presented competitions, you can also participate in the following races. For more information, you can click directly on the name of the race which interests you to go on the organizer’s site:

If you want to make a competition in Paris and if you reserve a tour with us, tell us and we can show you the route and help you to prepare the race (the Paris Marathon, for example). Need advice for these races? Ask us! Of course, if you do not want to participate in a competition and want to enjoy completely a touristic jogging, we are there.
We like the competition and running but we like Paris just as much!

Doing competitions, workouts, touristic joggings (with us 😉 ), trail or even on treadmills, whatever, we wish you to take a lot of pleasure by running! Happy new year! Enjoy 2013!